Toyota has released the toughest HiLux ever – a new-generation range that combines impressive global advances with extensive local development and evaluation designed to conquer the most severe operating conditions in Australia.

Towing capacity is now up to 3.5 tonnes* and payloads are up to 1240kg“ with 23 of new HiLux’s 31 variants confirmed as genuine one-tonners, including all 4×2 variants and all 4×4 single and extra cabs. 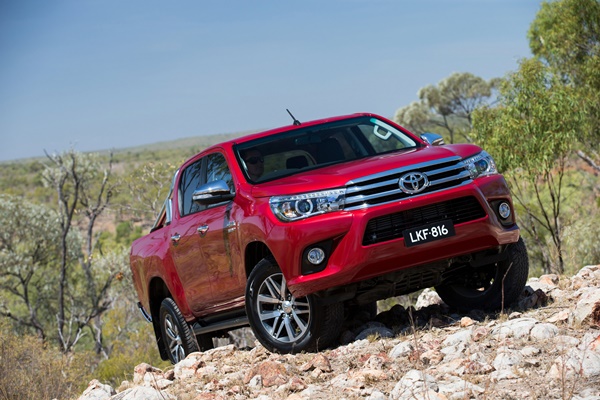 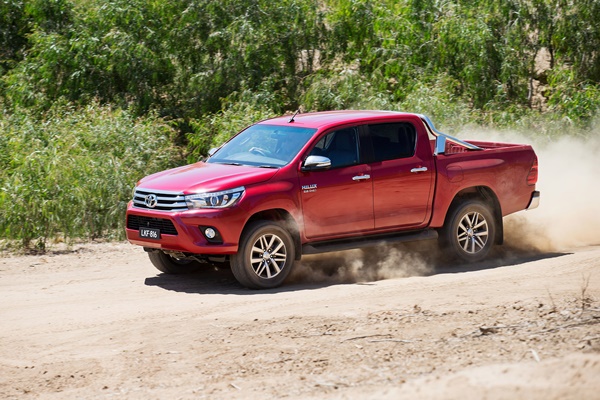 More than one million kilometres of testing, including 650,000km in Australia, has confirmed the performance, reliability and durability of new HiLux over the widest possible on-road, off-road and climatic conditions.

A new family of high-torque turbo-diesel engines is headed by a 2.8-litre version with maximum torque of up to 450Nm – a gain of 25 per cent compared with the previous 3.0-litre engine. Its 2.4-litre sibling also generates higher torque of up to 400Nm. 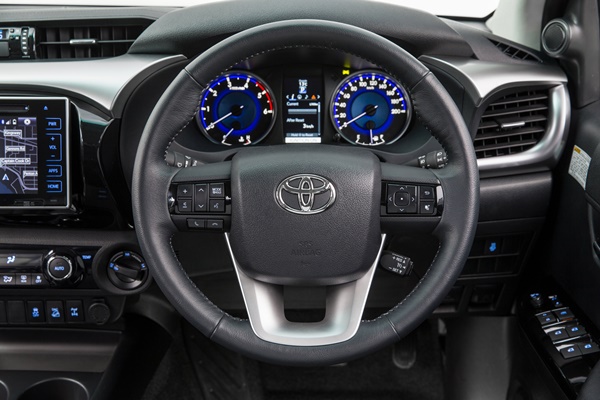 A wide range of Toyota Genuine accessories – including many produced for the first time – have been developed in tandem with new HiLux, including airbag-compatible bull bars and an industry pack to meet the requirements of mining, construction and other industrial users.

Toyota Australia’s executive director sales and marketing Tony Cramb said the new range is the total package – the toughest, most comfortable and most Australian HiLux ever. 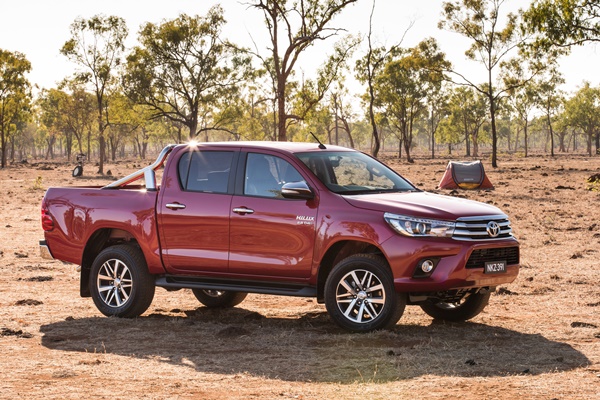 “Australia’s favourite ute has taken the ‘unbreakable’ HiLux DNA to new heights due to Toyota’s global expertise in developing tough trucks and the extensive involvement since 2009 of our local engineers,” Mr Cramb said.

“As a result, new HiLux is remarkable for the way it inspires go-anywhere confidence, advances its role as a workhorse and is also fun to drive with SUV-like ride, handling, comfort and convenience,” he said.

“It is ideally suited to Australian customers for whom towing is part of their life, carrying a load is vital for their job – and they love their bull bars, winches and other accessories.”

Mr Cramb said value has improved markedly across the range with thousands of dollars of added specification plus new-generation advances that comprehensively outweigh price changes. 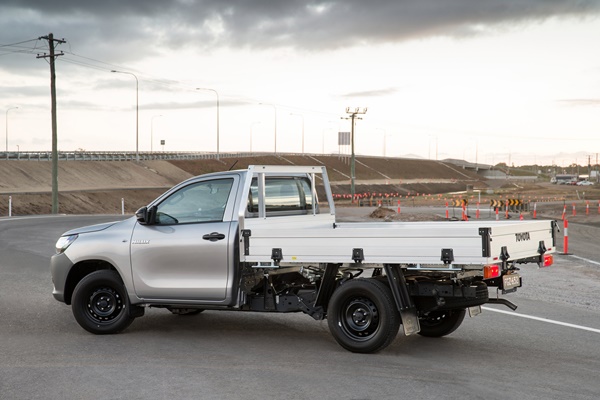 The range starts with the 4×2 single cab-chassis at $20,990#. The inclusion of standard air-conditioning alone – previously a $2,051 option selected by the vast majority of buyers – more than accounts for the price difference.

Toyota’s expanded HiLux range includes more double cabs, 4×4 and diesel choices plus the introduction of three 4×2 Hi-Rider variants with the ride-height and heavy-duty suspension of 4×4 vehicles. There are narrow and wide-body versions as well as single, double and extra cab styles – the latter now providing easy entry to second-row seats by incorporating rear-hinged access doors. 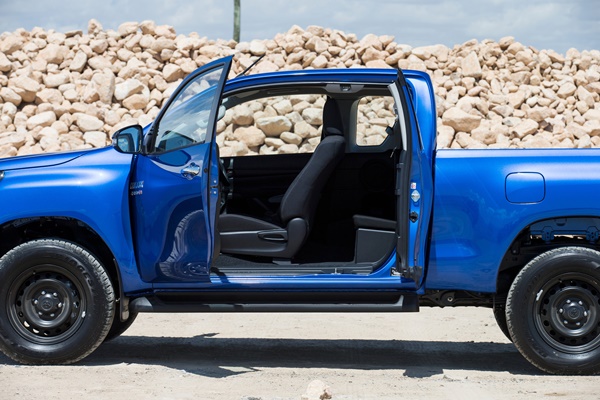 The range starts with Workmate and steps up to SR and SR5 grades, the latter offered with the option of a power-operated driver’s seat and leather-accented seat and door trims on 4×4 diesel double cabs.

Compared with its predecessor, the turbocharger for the diesel engines is 30-per-cent smaller with 50-per-cent faster response. These engines, fitted with a low-friction timing chain, deliver 80 per cent of their maximum torque at just 1200rpm.

In a world first for a pick-up truck, HiLux SR5 turbo-diesels with the six-speed manual gearbox gain an “intelligent” function. Activated by pushing a button near the gear lever, it produces smoother shifts by more accurately matching engine speed to the transmission for smoother driving.

All automatic HiLux models are fitted with a new six-speed electronically controlled transmission that adopts artificial intelligence and other measures to support both improved performance and economy. The sequential shift mode features blipping downshifts.

Rear leaf springs – ideal for heavy-duty towing and load-carrying – are 100mm longer and mounted wider for SUV-style ride comfort while the attachment point of the rear suspension to the frame has been moved 100mm forward and 25mm lower.

Off-road capability is deeper than ever with rear-wheel articulation improved by up to 20 per cent, the fitment of a rear differential lock on 4×4 SR and SR5, and improved approach and departure angles on most pick-ups. Ground clearance is 279mm on 4×4 extra and double cabs.

The locally developed underbody protection is 40 per cent thicker and 30 per cent larger to provide three times greater resistance to deformation.

At the heart of all these improvements is the stronger frame, which features an increase in torsional rigidity of 20 per cent. Side rails and cross members are up to 30mm thicker.

The tub is stronger with a revised deck structure that incorporates extra ribbing and reinforcements, plus a reinforced header board, thicker outer panels and steel-plate brackets on tailgate struts.

HiLux’s more rigid body makes greater use of high-tensile and galvanised steel while the upper body has 45 per cent more welds.

Finding the ideal driving position will be easier due to a higher hip point for easier access and better visibility, a greater range of seat-height adjustment and, on all but 4×2 single cabs, telescopic as well as tilt adjustment for the steering column.

Fresh exterior styling reinforces the tough and refined image for HiLux with a pronounced bumper combined with sharp-look headlamps, which are LED on SR5. A higher quality interior includes a modern tablet-style touch screen and steering-wheel controls for phone and multimedia functions.

Workmate seats are now covered in hard-wearing fabric instead of vinyl. This grade features a 6.1-inch touch screen display and an audio system with Bluetooth®^ and two speakers, upgraded in SR double cab variants to a seven-inch touch screen display with Toyota Link** connected mobility. SR and SR5 variants have a new air-conditioned box capable of heating or cooling two 600ml bottles. 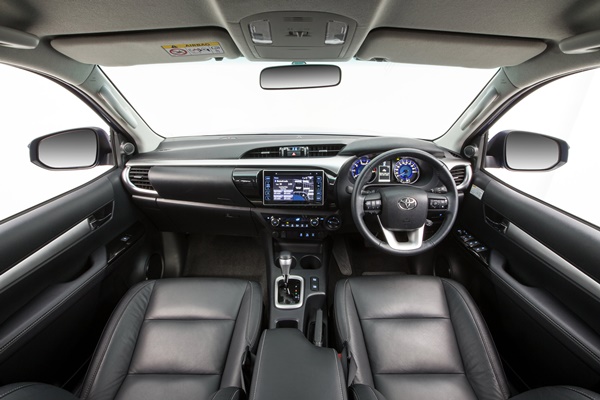 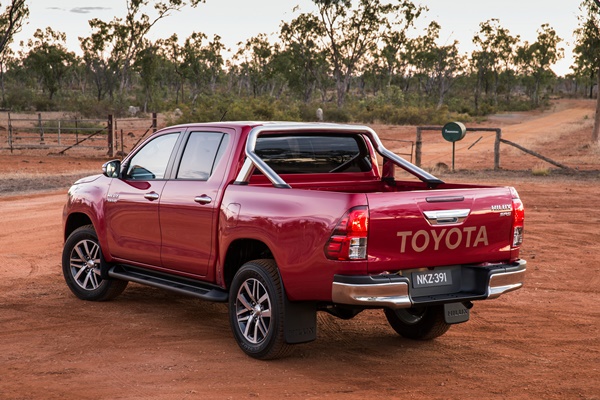 All Hi-Rider and 4×4 HiLux models are fitted with an under-bonnet fuse box to allow safe connection to the vehicle’s power supply when multiple accessories are fitted.

The new range is covered by Toyota Service Advantage capped-price servicing at $180 per service^^.

*Towing capacity is subject to regulatory requirements, towbar and vehicle design and towing equipment limitations.
“Payload weights are nominal and vary depending on options and accessories and tray/body type.
#Manufacturer’s list price is provided for media purposes only and does not include statutory charges or other on-road costs.
^The Bluetooth® word mark is owned by Bluetooth SIG, Inc. Not all devices will be compatible and functionality varies depending on the device.
**Toyota Link is available on certain vehicle models and grades only. Toyota Link/Enform services rely on data from the driver’s compatible mobile phone and information provided by third parties. Availability is dependent on a number of factors, including the availability of third party information, mobile service, sufficient mobile data allowance and GPS satellite signal reception. Mobile usage is at the user’s cost. Toyota Australia reserves the right to add, remove or modify applications. Further information is provided at www.toyota.com.au/toyotalink.
##Current navigation mapping database encompasses major capital and primary national road networks and offers some coverage in regional areas.
^^Maximum payable for standard scheduled logbook servicing (normal operating conditions) until first of 3 years or 60,000kms (whichever occurs first) (up to the first 6 services). Excludes Government & Rental vehicles. Contact your Toyota Dealer or go to toyota.com.au/advantage for other exclusions, eligibility and full details.

Nissan Navara has always been an excellent Ute. Nissan allowed the competition to get ahead of them in recent times and in an extremely competitive segment, that can be market suicide. […]

MY15 Amarok line-up boasts enhanced specification across the newly revised and expanded model line-up, including new highlight features such as Bi-Xenon headlights with LED daytime driving lights, standard with the Amarok Ultimate specification.
[…]

2012/13 OzRoamer 4×4 Dual Cab of the Year Award Introducing the best Dual Cab utes in a no holds barred shootout.Representing the pinnacle of Diesel performance. […]