Isuzu D-Max Ute is a quiet achiever in the Australian automotive landscape. Here is a company with a long heritage overseas, and in Australia under different names. But only started themselves in 2008.

Think back to the previous Holden Jackeroo or Rodeo. These were Isuzu’s rebranded and both were renowned as reliable robust 4X4 vehicles. In Thailand, the largest Ute market in the world, Isuzu D-Max has gained the no 1 position, outselling Toyota Hilux.

Isuzu came to Australia in 2008 with one vehicle. The D-Max. Their sales in 2008 were 273 vehicles. That’s right only 273 Utes were sold, admittedly in about two months at the end of the year.

What followed is a sales success story probably only rivalled by Subaru in terms of year on year growth.

Isuzu has grown by about 10% each year in sales. In 2014 they introduced the excellent MU-X as a 7 seat wagon based on the D-Max Ute. 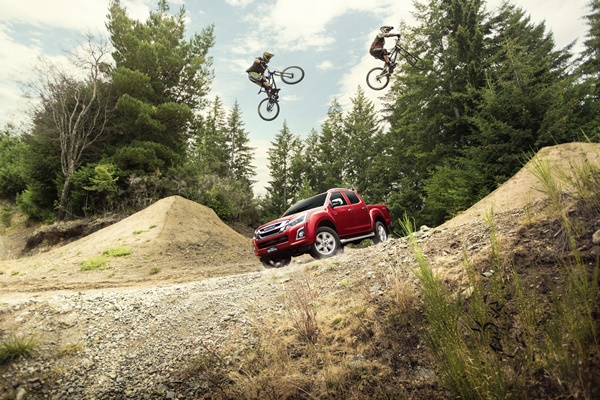 Not bad for a two vehicle company. However those two segments account for over 55% of the Australian market in 2017.

What you may not know is that Isuzu is is now the world’s largest manufacturer of trucks and diesel engines.

Which brings me to the real purpose of this article. I just spent a day with Isuzu as they launched a few upgrades on the MY18 D-Max. These are essentially:

There really isn’t much in this in terms of major changes, but those that have come are significant.

While the D-Max LST has been a special edition for a while, customer feedback has led to it being introduced as a permanent fixture at the head of the model line-up.

Following on from a number of major-upgrades in 2017, the 18MY D-MAX range is now headlined by the flagship LS-T, featuring many of the standout features and amenities as found on the MU-X LS-T;

Just like the rest of the range the 18MY D-MAX LS-T is powered by Isuzu’s exclusive 3-litre turbo diesel 4JJ1-TC engine — generating 130kW and 430Nm — paired with the smooth Aisin-built AWR6B45 6-Speed Automatic Transmission. 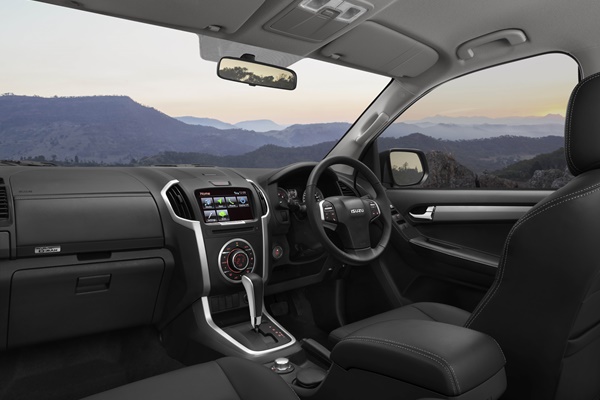 Given the recent trend towards 2WD Utes, the LS-T is available in two drivetrains; two-wheel drive or through Isuzu’s “Terrain Command” 4WD Select System.

Borrowing styling cues from the MU-X LS-T, the 18MY D-MAX LS-T has been tastefully refined with the additions of a new premium leather accented interior, featuring rich genuine perforated leather (on body contact areas) which is proven to breathe better than non-perforated — plus additional accents of polyurethane leatherette on the hard wearing bolsters and rests. 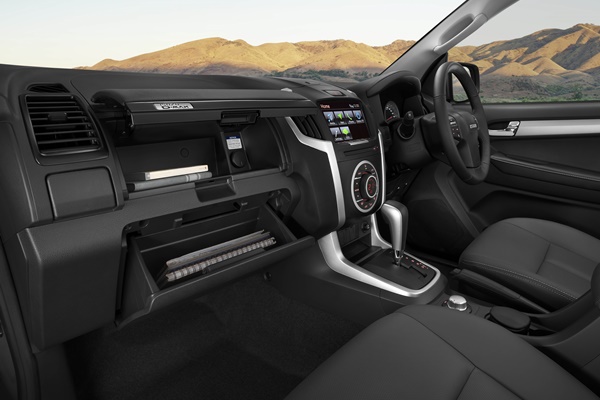 The dash, glovebox and armrest are trimmed in soft touch leatherette, door handles finished in chrome and the air vents and window switches finished in gloss black for a premium look — these soft-touch refinements can also be found inside the D-MAX LS-M and LS-U variants.

Another interior update for the D-MAX 18MY LS-M, LS-U and LS-T variants is the addition of two 2.1-Amp USB charge points; one in the dash, and one in the rear console. This update is fuelled by customer feedback on charging personal mobile devices whilst on the road, and can also be found across the entire MU-X range.

The overall feel is now more comfortable than before. The trend in range topping Utes is now for more luxury and comfort.

While the LST has made great strides in improving comfort, it still sits in the middle of the pack with features though. I would dearly love to see it with reach adjustable steering wheel, air conditioned seats, rear diff lock as standard, auto headlights, auto wipers, increased safety features, Apple Car Play and Android Auto, and the screen resolution for the Sat Nav in daylight with the lights on is atrocious.

This is where the Ute segment is heading and hopefully the next gen D-Max will be a segment leader. 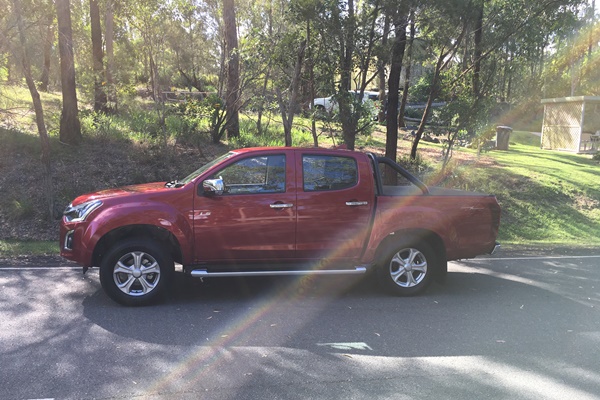 One criticism of Utes is the suspension. They are either too harsh unladen or too soft loaded, they bounce everywhere or sag when towing.

Suspension on Utes, more than any other vehicle needs to accommodate a number of polar opposite demands.

Through the use of stronger and lighter materials this new setup not only improves the ride, comfort and handling — the setup has proven to not compromise the payload capacity versus the 17MY 5 leaf spring setup.

Having driven the new suspension system over a few different road and track conditions, the first impressions were very favourable. It seemed to be more compliant with progressive damping and reduced the Ute bounce so often associated with empty Utes. 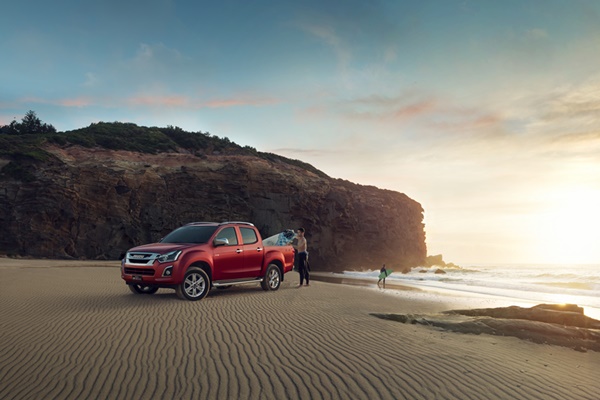 This improvement increases the payload capacity of all models by 100kg in comparison to 17MY models.

There is no change to the towing capacity. 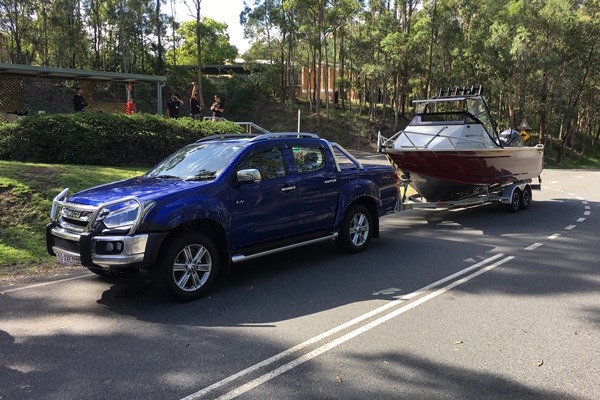 If you have read anything we have written about Isuzu before you will realise that they make excellent towing vehicles, a fact reinforced by almost half of the purchasers. Economy is excellent, ride and handling was great and is better now that they have improved the rear leaf suspension.

To top off the towing experience Isuzu has introduced Trailer Sway Control (TSC) across all 18MY models (excluding the D-MAX 4×2 low-ride SX Single Cab Chassis manual), improving on the active safety system offerings. 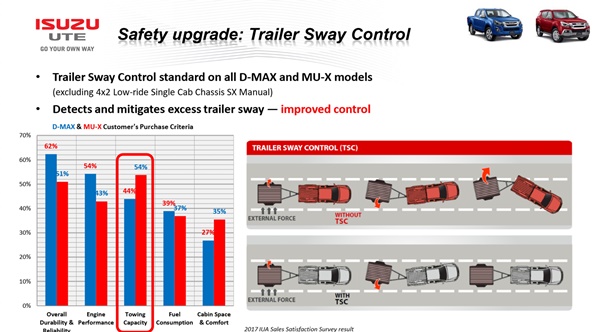 Stemming from the vehicle’s Electronic Stability Control (ESC) system, the TSC system monitors trailer movement through the ESC sensors and modulates throttle and brake inputs to individual wheels — bringing the towed trailer under control if unsolicited sway is detected.

On the launch I towed an 1800kg boat and a van between 1900 – 2000 kg. Both simply followed without issue. The low flat torque curve simply pulling away without any complaint.

Previously I have towed caravans, car trailers, boats, furniture trailers and much more with either of the Isuzu variants.

I have to say that I have towed heaps with both Isuzu’s and never experienced an ounce of trouble, but the TSC is an added peace of mind addition.

Previously reserved for LS variants, all 18MY D-MAX Ute models now feature a rear bumper to improve occupant collision protection, along with a reversing camera as standard for increased safety and visibility — however both remain optional on cab chassis models due to the nature of the tray. 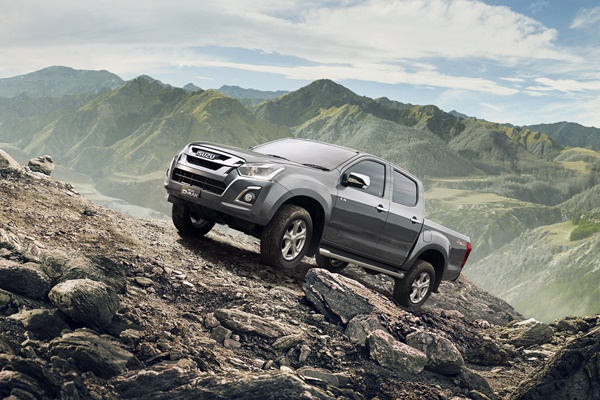 Every Isuzu vehicle is backed by the Isuzu UTE Australia Service Plus Program which includes:

The 75,000km is a little on the light side considering these are vehicles that are meant to be used and that may be passed in two or three years easily.

The Capped Price Servicing Program for 18MY – onwards vehicles, features a 12 month or 15,000 kilometre interval. In fact, over the course of 60 months the cost of ownership is one of the most economical within the 1-tonne Ute and ute-based SUV class.

Driven directly from feedback, Isuzu UTE has refined the 18MY range with bold new colours across the D-MAX and MU-X range. The 18MY D-MAX range is headlined with the addition of a three new colours; Magnetic Red Mica, Cobalt Blue Mica and Graphite Grey Metallic. The 18MY MU-X is also now available in the new Magnetic Red Mica.

The 18MY Isuzu D-MAX and MU-X range will go on sale nationally from the 1st of May. 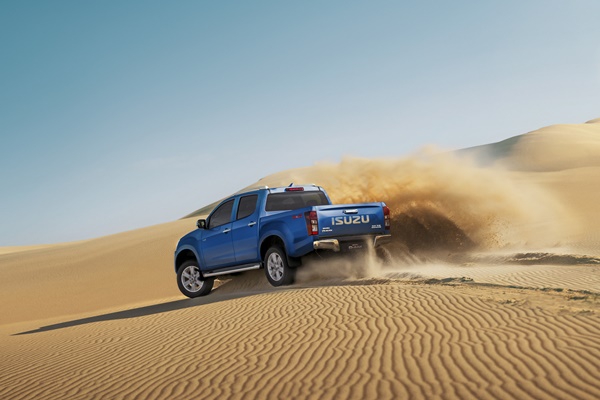 Isuzu has upgraded the D-Max and MU-X range with more safety features, making the LS-T a permanent feature of the D-Max range, revised suspension that provides a more compliant ride while maintaining increasing payload and other comfort features.

The new Nissan V6 turbo-diesel has a major performance advantage over its four cylinder turbo-diesel rivals, with no appreciable fuel consumption penalty all stumps across Australia should start to quiver as this 3.0-litre engine produces a class-leading 170 kW power and 550 Nm torque from a low 1750 rpm. […]