Isuzu lent me a D Max SX Single Cab High Ride 4X2 Ute for a couple of weeks to evaluate.

The D Max SX 4X2 Ute High Ride is the work horse of the Isuzu range and has widespread acceptance as a hard working robust Ute.

The D Max was updated early in 2017 with a Euro 5 compliant engine and some other improvements. Here at Ute Guide we are unashamed fans of the D Max range and our time with the SX 4X2 did nothing to reduce that enthusiasm.

This comes after we have had a run of single cab Utes of late.  We have tested the Ranger XL CC, the Navara RX CC, the Mitsubishi Triton 4X4 CC and others 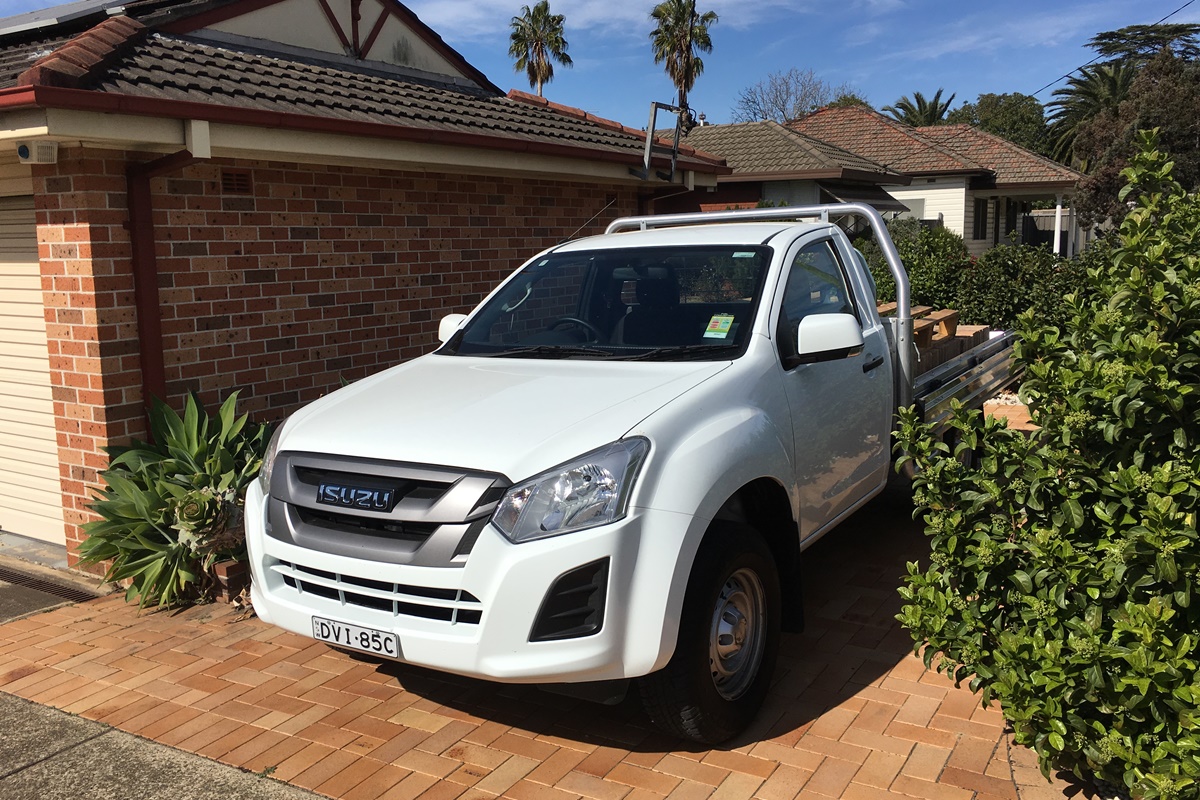 Looks and style are subjective obviously, but from the outside the D Max SX isn’t a bad looking Ute. It adopts the softer bonnet and grill, more like the Navara rather than the American truck like a Ford Ranger.

From the outside the D Max SX looks exactly like it should for what it is designed for. A utilitarian workhorse that would last forever. From the side you realise just how long the Ute is. It has a sleek grill, medium roofline and sides. Integrated is a word that describes the overall look.

The front has halogen multi reflector headlights, no fog lights and bold wheel arches. The particular vehicle we had was fitted with a robust genuine Isuzu aluminium tray, steel wheels, under front skid/splash plate, under tray spare wheel carrier and tow bar.

Both high and low beam lights are effective, and unlike the Mitsubishi Triton GLX CC, the low beams stay on when high beam is selected. 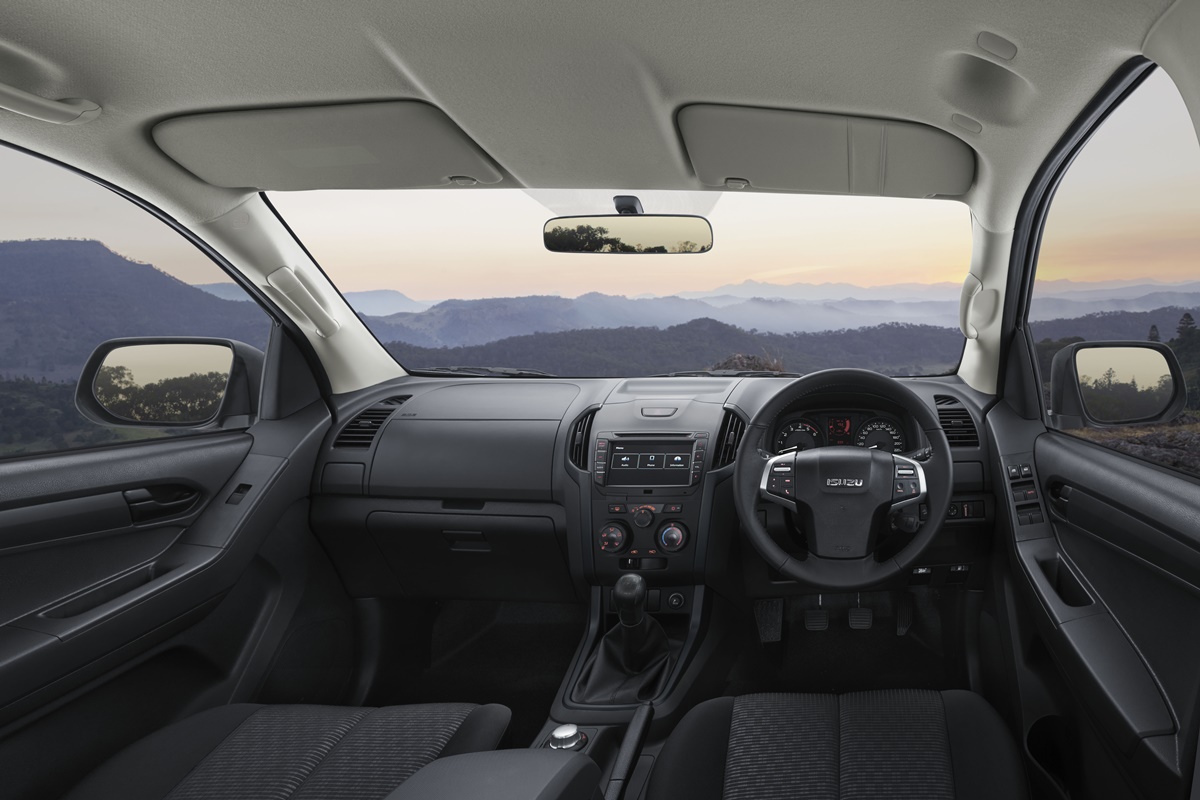 One thing I like is that the High Ride structure allows easy entry and exit for the old bones. The doors open wide and with the grab handles it’s easy.

Inside, Isuzu has made concessions to some softer touch points, on the dash and console lid, but overall it’s a work Ute. 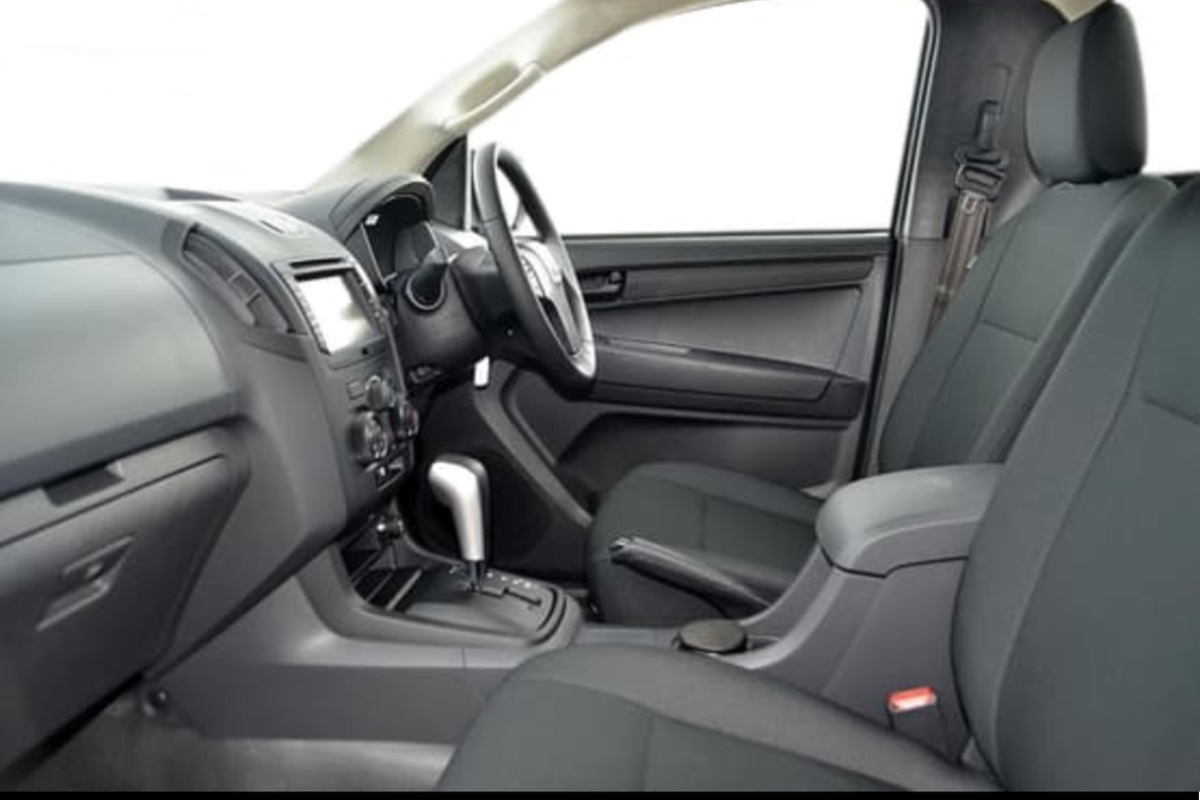 The front seat is relatively comfortable, but I would have appreciated a manual additional lumbar support. For the long legged drivers, there isn’t quite enough seat slide, but the Isuzu seems slightly roomier than some others.

There is however plenty of head room, allowing drivers to keep their hat on if they wish, and adequate shoulder and hip room, even for the more amply built amongst us. I did hit my left knee a few times though, but most drivers aren’t as long legged as I am. 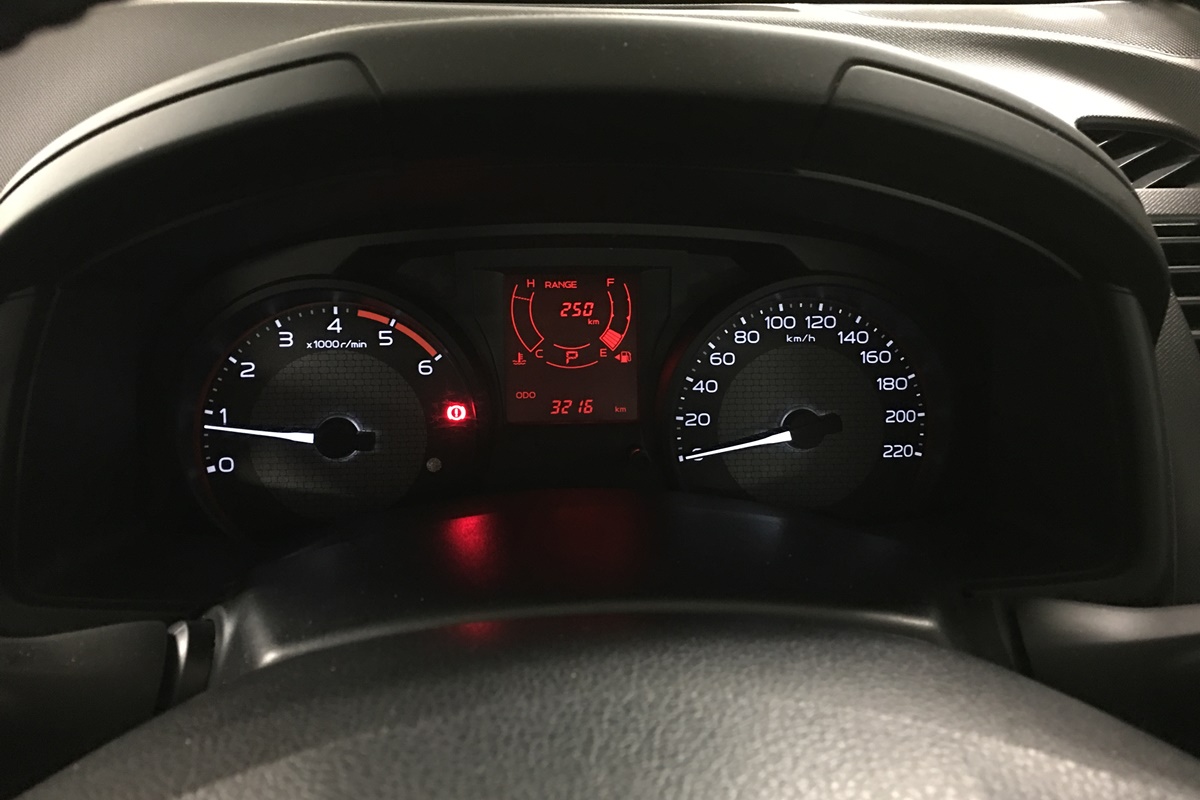 The dash is typical Isuzu with two outer dials and a MFD in between. However the red graphics on the MFD are extremely hard to read in daylight. This was so obvious, as I swapped the Single cab for a space cab D Max with white graphics and the difference was amazing. Isuzu please take note.

The steering wheel is thick and houses controls for the stereo and cruise control. It is however only height adjustable. I would have liked to slide it in a little to give me some more room.

The central stack is simple but effective. I disliked the fact that there was no Sat Nav. and the screen again was difficult to read in direct sunlight. If I bought one that would be the first thing I replaced. I know it’s all about price, but this lets down an otherwise good product.

Storage is pretty good, with a decent sized glove box, a second on top and large centre console bin. Good door pockets with bottle holders, central cup holders and the clever feature of slide out cup holders on the dash.

The almost hose out interior and simple features are a nod to the practicality and functionality of the Isuzu D Max SX. 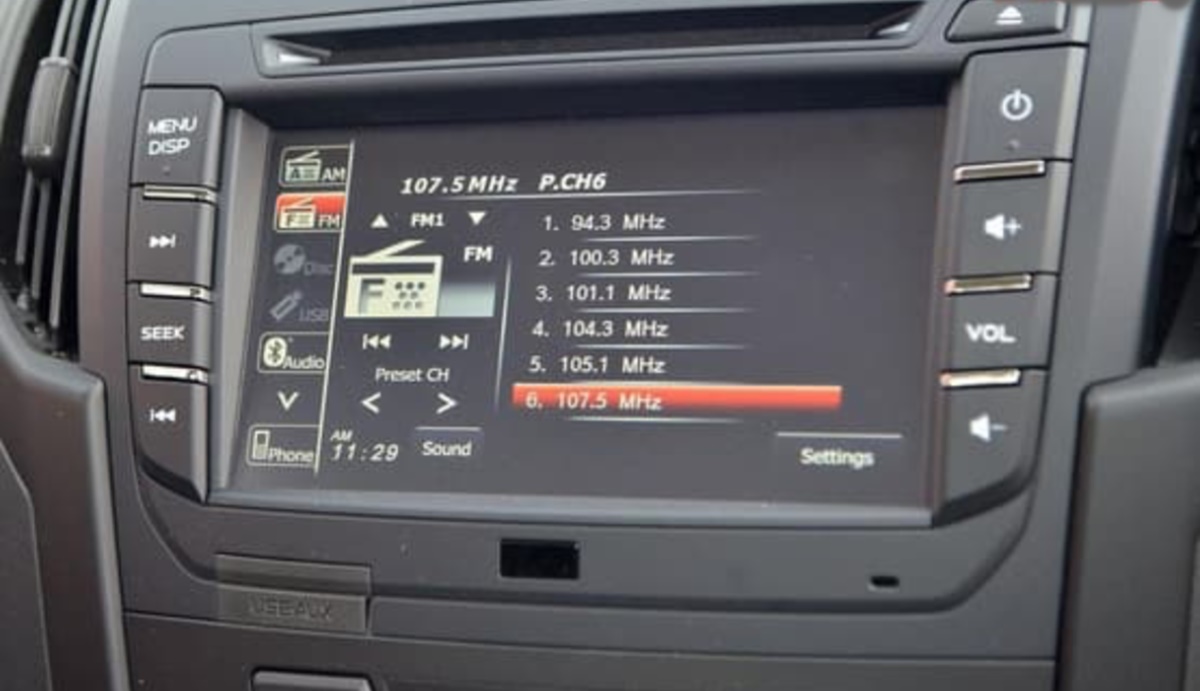 This could be a short section as the D Max SX isn’t exactly laden with features.

However the story here is also about what the D Max SX doesn’t have as features that are really missed.

Overall, it is fair to say that the D Max SX is lacking some features that are taken for granted, and necessary safety features in a vehicle such as this. 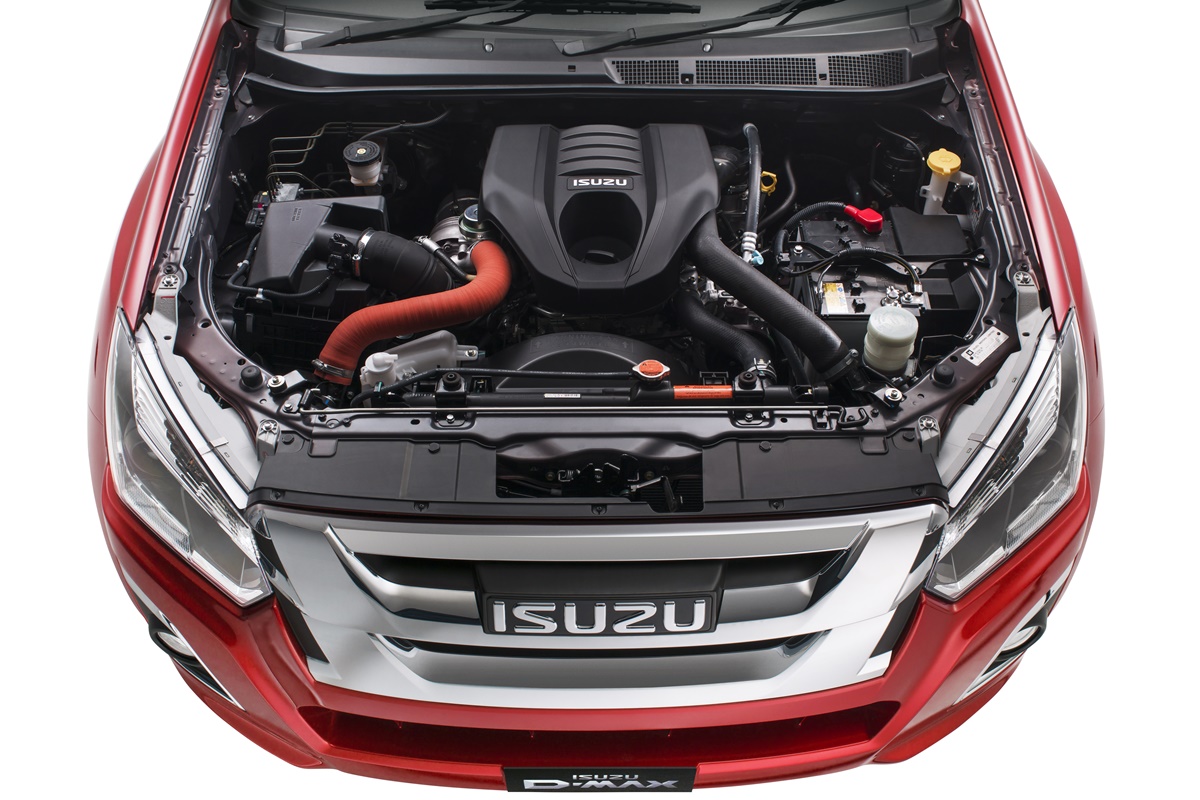 Isuzu has kept the single engine throughout its range, rather than opting for a smaller capacity in its 4X2 range like the Ford Ranger or Nissan Navara.

The D Max was upgraded early 2017 and is powered by a Euro 5 compliant 3.0L 4 Cyl. Intercooled turbo-diesel engine with double overhead cam.

The flat torque curve allows easy driving and also assistance with fuel economy, my real fuel usage was about 10.5L/100K over the 1000km.

Isuzu are, I think, the largest producers of diesel engines in the world. The engine that powers the D Max is similar to the engine I their super successful 4 tonne truck range and is virtually unbreakable. I know drivers that have more than 600,000km on their trucks with no issues.

That kind or robustness and reliability are hard to find and should count for a lot in a work Ute. 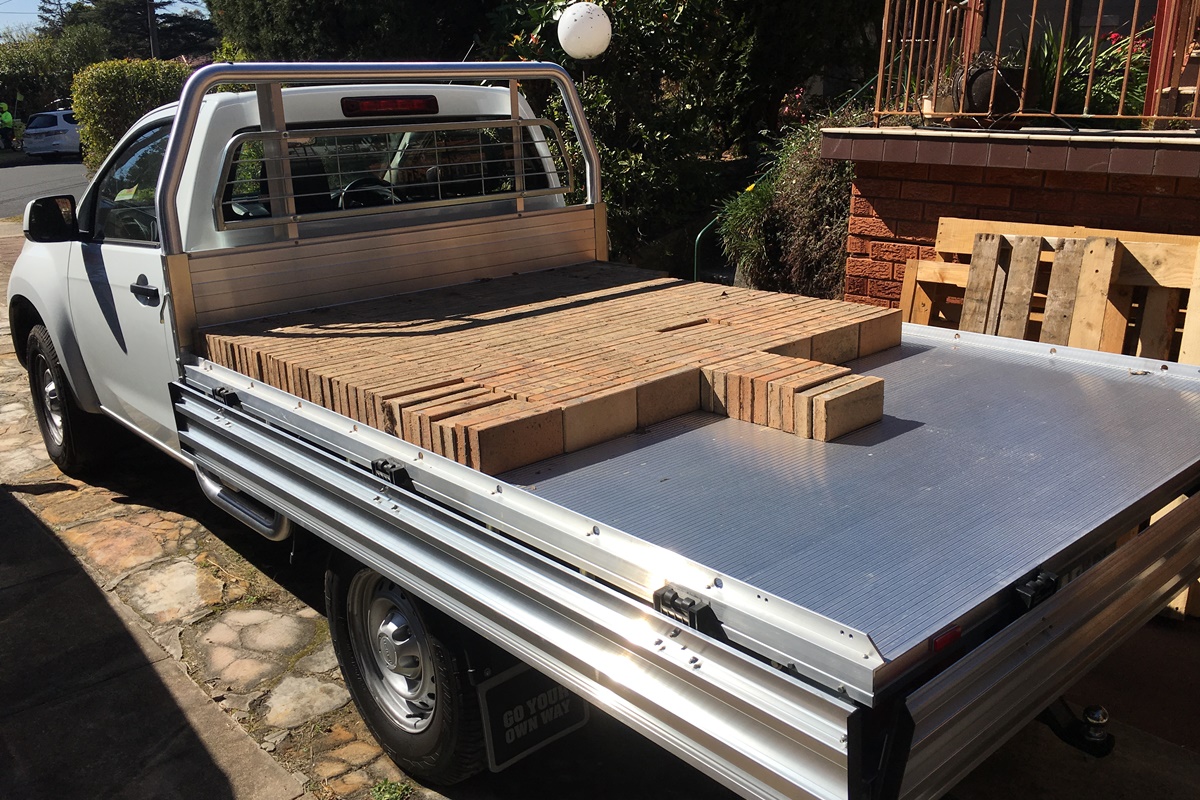 Isuzu D Max SX Single Cab High Ride 4X2 – What it is like to drive.

Like a lot of work Utes, the Isuzu SX is a little bumpy with no load on. However it is more compliant than a few recent Utes we have tested.

With a load on the ride becomes even more car like. With the 3.0L engine, we never experienced a problem with power either.

We used the Ute as it should be used and loaded about 1200kg of pavers on one occasion and about a tonne of sand on another. Apart from a softer ride and slightly slower off the mark, it was like the load wasn’t even there.

Front suspension is a coil with gas filled shock absorbers and stabiliser bar. The rear is a heavy duty leaf set up. What this means is that the suspension is designed for heavy load carrying capacity and not for occupant comfort.

Over the two weeks I had the D Max SX Single Cab High Ride 4X2 I drove over 1000km. This covered around town driving, freeway and country secondary roads.

On the freeway, the 6 speed transmission proved relaxed and rarely hunted between gears. It cruised at a relaxed rpm at the speed limit. There was little road noise, or wind noise and talking on the Bluetooth was better than many other Utes.

Cruising in the suburbs, again the D Max was easy to drive, however reversing anywhere without the aid of a reversing camera proved a pain in the ass, especially with a long tray. Ours wasn’t hooked up for some reason, but they should be mandatory and standard.

Around town the turning circle (like most Utes) poses a daily problem, and requires a little thinking of where you go and a bit of pre planning. It is not as bad as the Toyota LC70 we tested a few weeks back though. 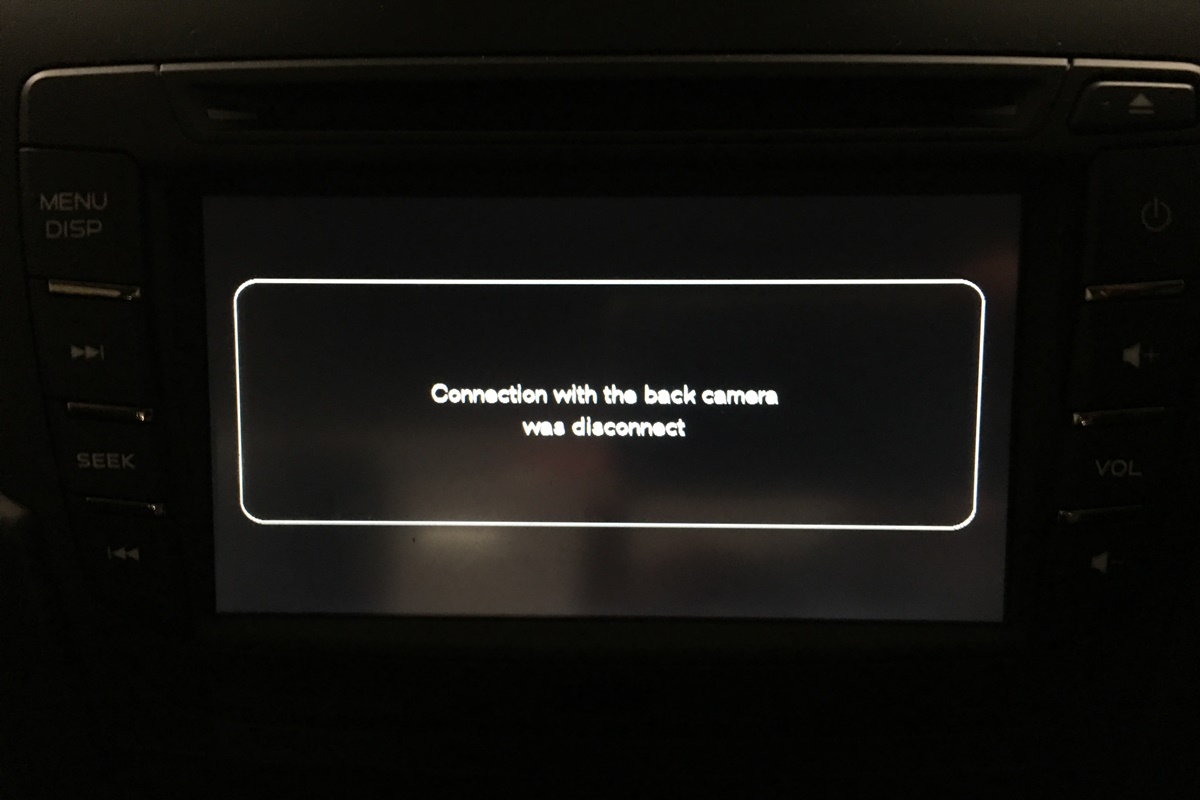 Overall visibility is pretty good, except for the aforementioned reversing camera. It’s easy to see over the bonnet and the rear mirror provides clear vision. Over the shoulder is a little restricted, but the decent sized external mirrors aid greatly.

Again it always has been a good tow vehicle. While we didn’t tow this time, we have previously and we prefer an auto. Remember to factor the tow ball download rating into your payload capacity calculations. 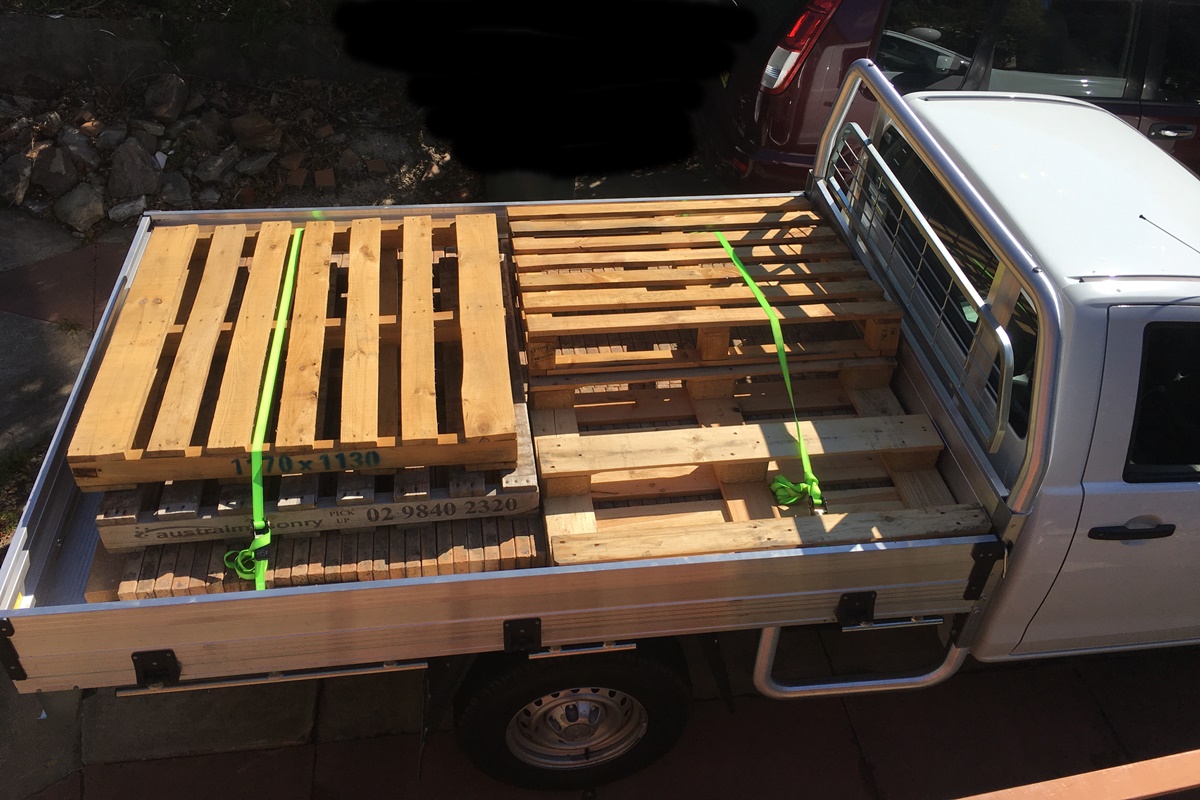 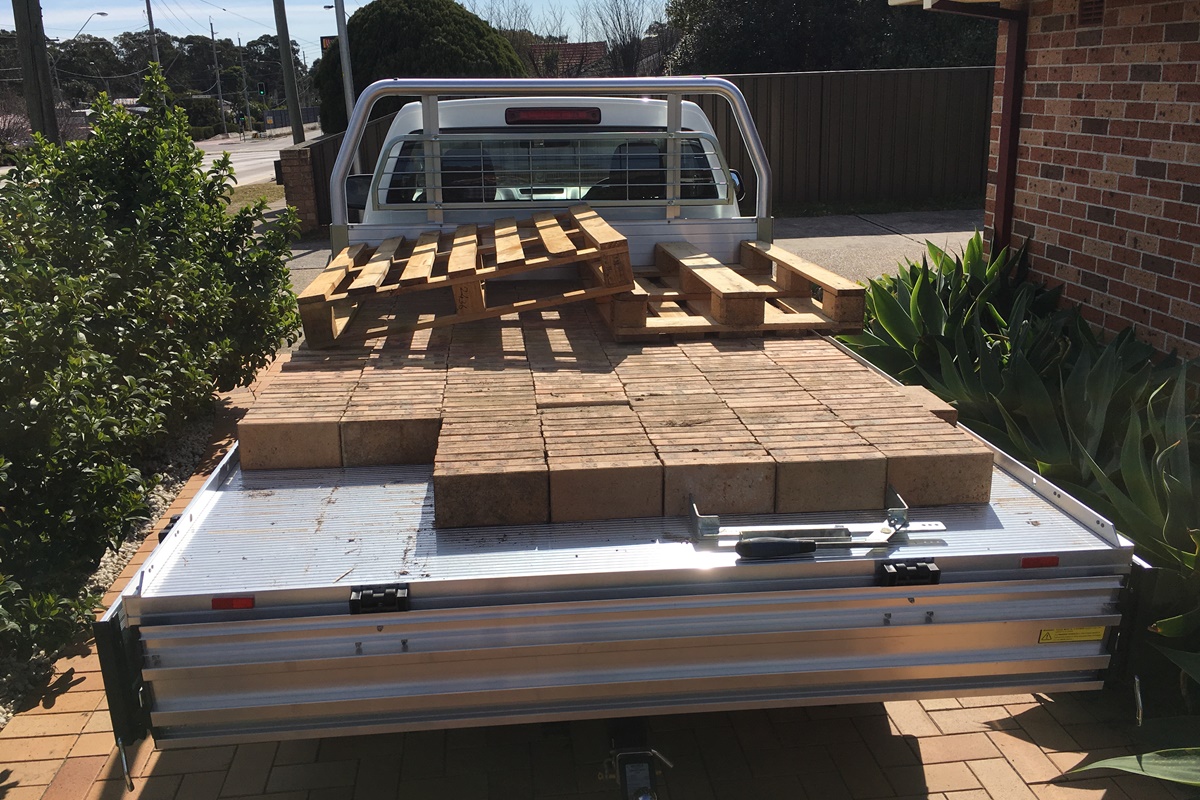 Safety is an ever moving feature on cars and more importantly Utes. The Isuzu D Max SX Single Cab High Ride 4X2 has a 4 star ANCAP safety rating but the dual cab Utes have 5 Star. 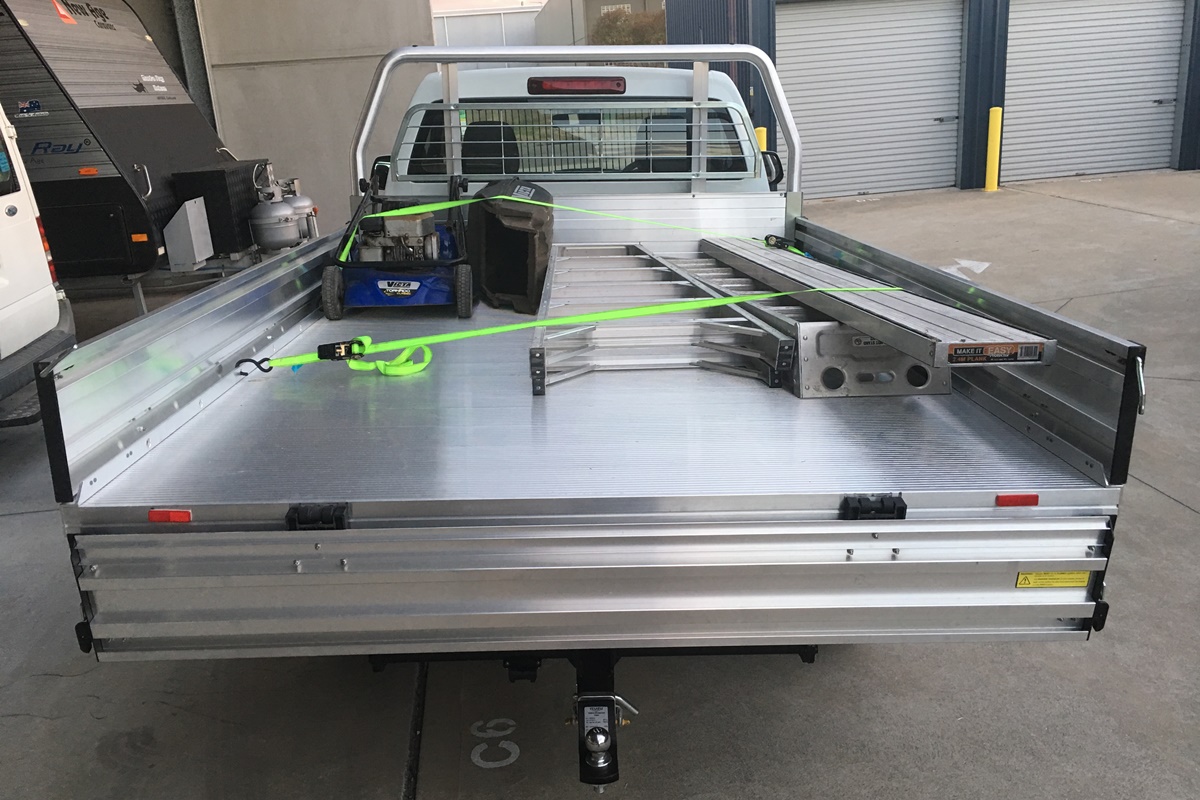 A single cab chassis 4X2 Ute is a workhorse with no pretensions at a family vehicle or a recreational vehicle.

In light of this they should be able to tow heavy trailers and have a big payload, as well as repeat the tasks asked of it over many years.

The Isuzu D Max SX Single Cab High Ride 4X2 is definitely up for the task. It is singularly designed to fit this purpose.

It is a little cramped for the longer legged amongst us, but for most drivers there is enough room. The tray is huge at 2.6m x 1.8m and has convenient internal tie down points. The 1294kg payload is excellent.

Like a lot of tray back Utes, the filler position for fuel seems an afterthought. The Isuzu will fill easily enough, better than almost all the recent Utes we have tested, but the cap is difficult to get on and off.

As a workhorse Ute for a trade person or delivery driver, you will be hard pressed to find a better Ute.

Single Cab Utes, while seemingly unpopular for the recreational market, fill an extremely important role for the work market. Unlike other competitors, the Isuzu maintains 3.0L engine in the CC variants which is a bonus.

We had it for a week and used it as it should with zero complaints from the vehicle. 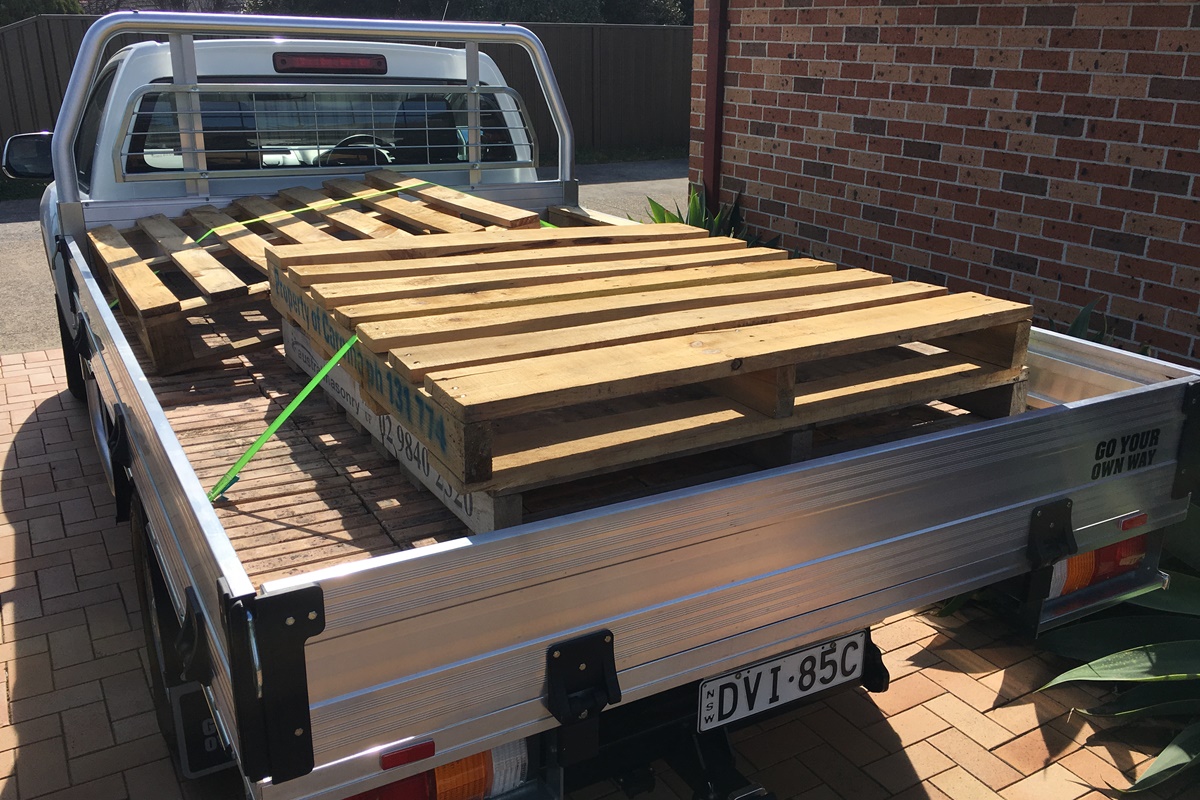 I thought I would do an article comparing three of the best dual cab Ute on the market today. The recently released Euro 5 compliant Isuzu D Max update, the multiple award winning Mitsubishi Triton Exceed and the surprisingly sophisticated Holden Colorado LTZ. […]

Due to increasing costs associated with the 21MY Isuzu D-MAX, Isuzu UTE Australia (IUA) will introduce a price adjustment for the D-MAX range; with the RRP increasing by $1,000. […]