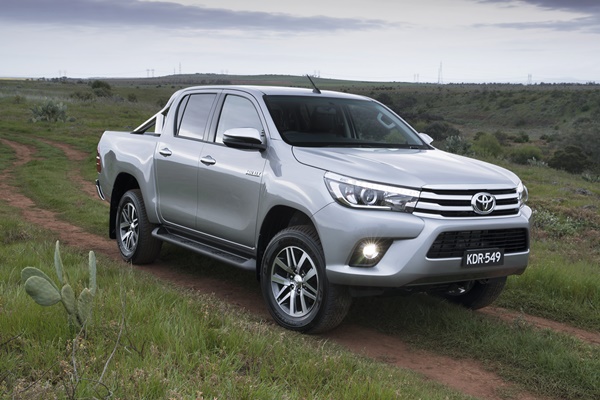 Australia is one of the most competitive Ute markets in the world and demand for a better class of Ute has increased.  The Ute market is shifting and Toyota Hilux SR5 needs to stay relevant in the ultra-competitive segment with more refined and improved offerings from Ford, Mitsubishi, Holden, Mazda and Isuzu in the last few years.

Toyota Hilux has been an outstanding sales success for Toyota over the years with over 850,000 sold in Australia alone since 1968. That equates to better than 1 in 20 globally and as such Australia is an important market for the Hilux. To put it in perspective the Hilux in all its variants has been the highest selling vehicle for the last couple of years, yes a Ute is the top selling vehicle in Australia To say it is important to Toyota Australia is an understatement.

When Toyota released the eighth-generation HiLux they made it stronger. Everything has been strengthened, including a thicker frame, stiffer body, new high-torque turbo-diesel engines, advanced six-speed transmissions, beefed-up suspension and brakes, and expanded off-road ability.

Externally it has a very distinctive grill and protruding nose. I actually like it but many don’t. The SR5, as you would expect, has plenty of external bling like LED headlights and daytime running lamps as standard, front fog lights, a sports bar in the tub, chrome radiator grille, chrome rear step and new 18-inch alloy wheels which are fitted with a new 265/60 R18 highway tyre that is designed to assist with fuel economy without compromising handling.

Internally our SR5 was fitted with the optional pack that included lather seats, which were well worth it. They are electronically adjustable and very comfortable. There is enough slide for even the tall drivers to sit and with the height and reach adjustable leather steering wheel, everyone can get comfortable. 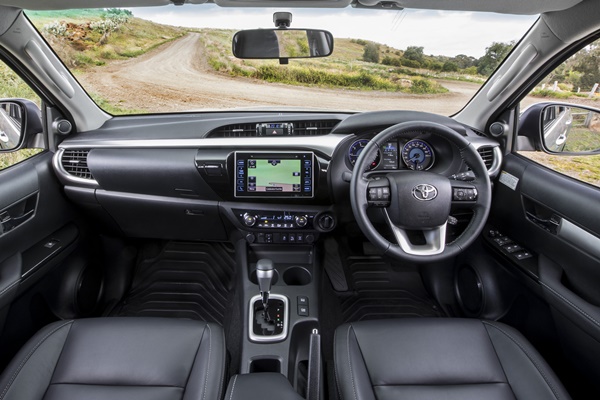 The dash has a two dial blue light style with a MFD between. Very clear and easy to use and read. The steering wheel frames toe dash perfectly, some vehicles, when you drop the wheel, you lose the top of the dash from sight. The wheel itself feels great in your hands and houses the audio and MFD controls.

The cruise control is the familiar stalk below the indicator stalk. I actually really like this simple and functional system. Indicator and wiper stalks are slightly higher than the steering wheel spokes to allow for clear sighting. Toyota has introduced the slide out cup/bottle holders below the side vents, a brilliant idea stolen from Isuzu.

The centre console is uncluttered with the transmission lever and a select for drive mode button. In front are two cup holders and behind a clever storage area. The centre console is padded on top and reasonable size. The select on the fly dial for the 2WD/4WD system is located just below and to the left of the steering wheel. This sits alongside the rear diff lock, downhill descent control and traction control switches. Just above are the A/C controls etc. Sitting proud on top of the centre stack is the 7 inch screen that houses Satellite Navigation, Toyota Link, audio system etc. It works well enough but Toyota keeps refusing to include Apple Car Play and Android/Auto and that is a pain for some drivers.

The rear seats are comfortable for three people and they have more knee clearance, a top-tether anchor and two ISOFIX child-restraint anchors, and a 60-40 split-fold rear seat base with central armrest and A/C vents which is a bonus. 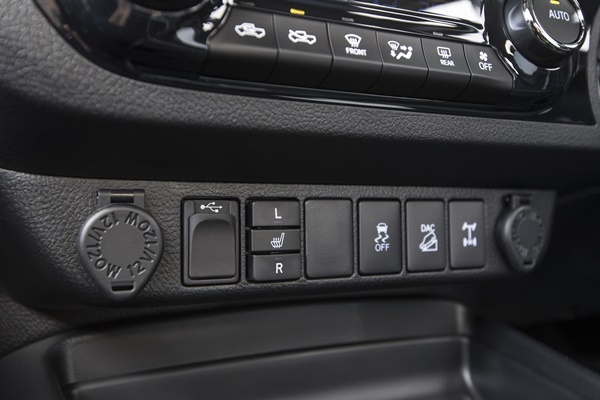 Hilux is powered by an improved 2.8L high-torque turbo-diesel engine. It produces power of 130kW @ 3,400rpm and torque of 450Nm @ 1,600rpm. This is much better than the previous engine and translates directly to a more relaxed driving experience. This aided by the intelligent 6 speed automatic transmission that has been specifically developed for the engine. It is quieter on the road, more responsive to throttle inputs and more direct steering means better handling. 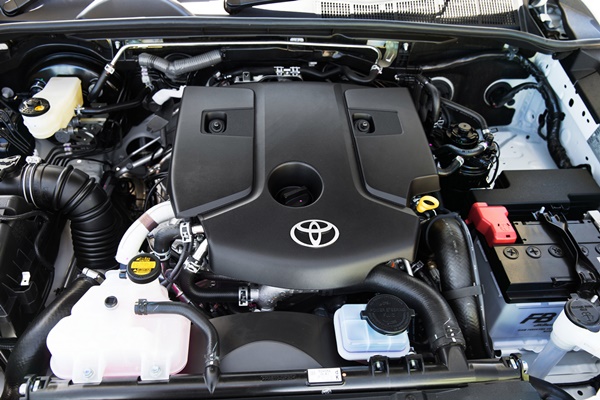 The Hilux has always been an outstanding 4WD Ute and it is now even better and stronger with unique underbody protection and heavy duty suspension package. The shift on the fly features an electronic 4×2 & 4×4 transfer switch and a rear diff lock.

More than one million kilometres of testing, including 650,000km in Australia, over 6 years, has confirmed the performance, reliability and durability of new HiLux over the widest possible on-road, off-road and climatic conditions. 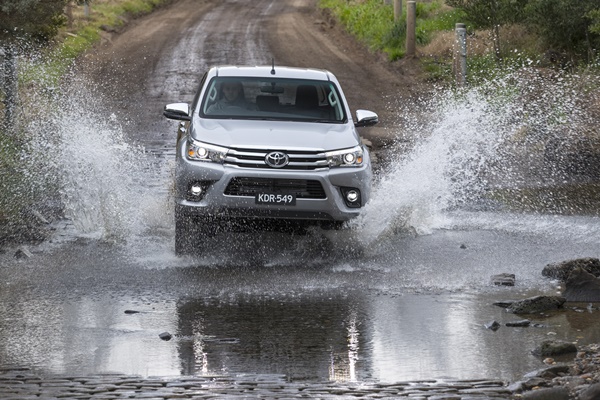 The off road capability has been improved with 20% more wheel articulation and better approach and departure angles. Hilux dimensions are overall length of 5330mm, width of 1855mm, height of 1815mm and a wheelbase of 3085mm. It has a wading depth of 700mm and clearance of 279mm, which is awesome. Approach angle is 31 degrees and departure angle is 26 degrees. There really is no need to discuss the 4WD ability of the HiLux. It if superb.

Towing has now been increased to 3,500kg and this makes a huge difference to the competitiveness of the Hilux. Again it always has been a good tow vehicle, but felt lacking at times. The increased torque and the low rpm delivery now means that towing with the Hilux gets a big tick. 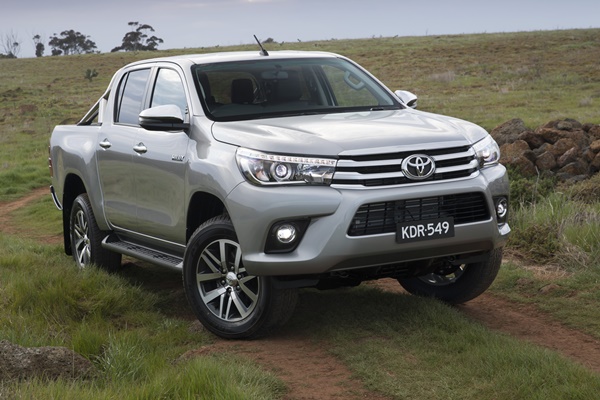 Hilux SR5 has a 5 star ANCAP safety rating and features include:

A wide range of Toyota Genuine accessories – including many produced for the first time – have been developed in tandem with new HiLux, including airbag-compatible bull bars and an industry pack to meet the requirements of mining, construction and other industrial users. The new range is covered by Toyota Service Advantage capped-price servicing at $180 per service^^.

The Toyota Hilux continues to be a premier 4WD Ute. Recent improvements have made it better and stronger. It is now better at towing and driving off road while cocooning the occupants in more comfort and style. It missed the award by one point but to be honest I have never met a buyer that has regretted buying a Hilux. 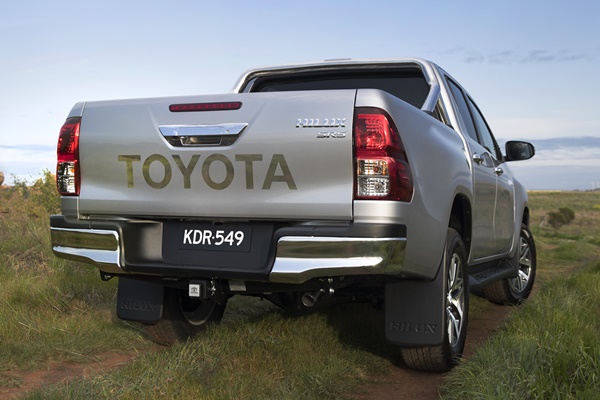 About Rob Fraser 247 Articles
Rob first learned to drive on the farm in a left hand drive WW11 Jeep when he was 11, many years ago. He has maintained a strong interest in the industry ever since and was hooked on 4WDriving way back then. Often known for taking the 4WD in the driveway over the sports car, he has travelled pretty much everywhere in Australia and when he is bored goes for a drive.
Website

MY15 Amarok line-up boasts enhanced specification across the newly revised and expanded model line-up, including new highlight features such as Bi-Xenon headlights with LED daytime driving lights, standard with the Amarok Ultimate specification.
[…]

How To Save Up For Your New UTE

Australia loves UTEs! They provide the perfect combination of work and play, functionality and pleasure. It’s little wonder that around 1 in every 5 cars sold in this country is a UTE. […]

To assist with keeping our patrolled shores safe, Isuzu UTE Australia is pledging support to the national symbol of beach safety, Surf Life Saving Australia, with a fleet of Isuzu D-MAX Utes and MU-X SUVs. […]