Both the Isuzu D-Max LST and the Toyota Hilux SR5 have undergone an upgrade release in the last 12 months. These two Utes probably have the best reputations for being honest, robust and almost indestructible Utes. They are very close in features, safety and price that it is natural to compare them.

In the world of recreational dual cab 4WD Utes there are 7 to choose from. The Isuzu D-MAX, Nissan Navara, Toyota Hilux, Mitsubishi Triton, Mazda BT-50, Holden Colorado and Ford Ranger. There are more brands, but really these are the best picks.

Both the Isuzu D-Max LST and the Toyota Hilux SR5 are the top of the range in their respective model line-up. Both have more luxury than the farm Ute I grew up with and have a 5 star ANCAP safety rating.

Both are popular with recreational drivers, trades people, mine operators and farmers. They are utilised as a work Ute during the week, a towing vehicle, a family run-around and an off road truck or touring vehicle as well.

For the most part here at UteGuide, we focus on the Utes ability to cater to the lifestyle aspects. Towing, taking the family to the beach or mountains, camping, outback touring etc. Like the Swiss Army Knife, the lifestyle aspects taking precedence in the choice factors. 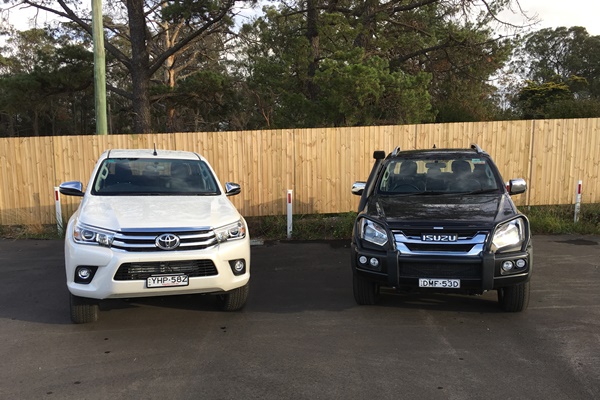 Both the Isuzu and Toyota follow the softer, streamlined design philosophy. The Toyota has a prominent grill and front end that seems to polarise opinion. They both have a sleek bonnet and grill, with LED headlights and DRL’s.

They both feature running boards and sports bars in the tub.

Internally the two Utes differ slightly. It appears that the Isuzu is more aimed at the worker and has softened the interior, whereas the Toyota is really trying to focus its SR5 on the recreational buyer first.

Both Utes are very comfortable inside with subtle differences.

The Isuzu has leather seats as standard, where it is an option on the Toyota for some $1500 extra. This does however, include seat warmers. The seats are a more comforting in the Toyota.

One day Manufacturers will include A/C seats as well. Better suited for Australian Conditions.

The stitching on the seats, door rests etc. on the Toyota gives a little more luxurious feel to the interior.

The Toyota has a reach adjustable steering wheel, which is an advantage as well as auto headlights. Both steering wheels are comfortable and house the typical controls. I do like the cruise control stalk for the Toyota. It is easy to use and simple. The Isuzu is also simple to use.

Both vehicles have the handy pull out cup/bottle holder below the A/C vents. The centre cup holders in the Toyota are forward of the transmission lever with additional storage behind. The door pockets are similar and there are more storage areas in the Isuzu, with double glove box and storage on top pf the dash console.

Both are lacking simple things like heated external rear view mirrors, electrochromatic rear view mirror auto wipers etc. The Isuzu has a larger centre stack screen, but the buttons are fiddlier than the Toyota. The Isuzu also has Apple Car Play and Android Auto which is a bonus.

The Toyota has a better audio system and speakers, but their refusal to include Apple Car Play and Android Auto is always a limiting factor.

Rear seat room is much the same in both, but the Toyota has large air vents back there.

As far as internal noise goes there are two schools of thought. Some owners like the diesel rumble, it makes them feel they are driving a Ute, others like a quieter car like interior. The Toyota is a little quieter than the Isuzu for engine and road noise.

Overall, even though they have similar levels of features, I would have to say the Toyota takes the honours for the more luxurious ambience on the interior. 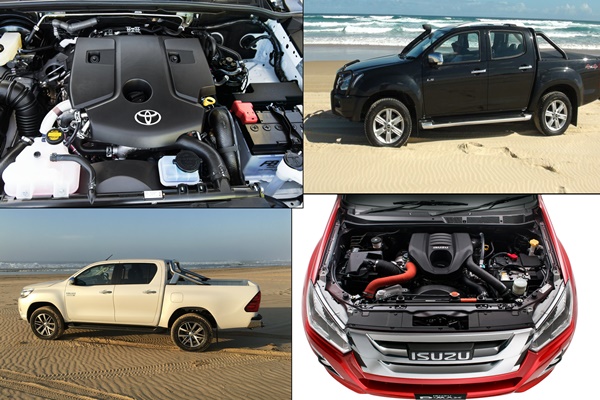 In real world conditions, there is imperceptible differences between these two vehicles. Both can tow heavy trailers without fuss. Both bring their torque in low down for relaxed driving and economy.

The difference in fuel economy is nothing and is negated by a driver’s right boot.

One advantage the Toyota has is the standard rear electronic diff lock. A major advantage for off road driving.

Again there are such minor differences between these two vehicles that you are measuring in mm to see it.

One thing to note though is that Toyota has a maximum 3200kg tow rating with a tow ball rating of 320kg for the automatic version. This is 3500kg and 350kg for the six speed manual version.  This is a limiting factor when towing and for touring etc. 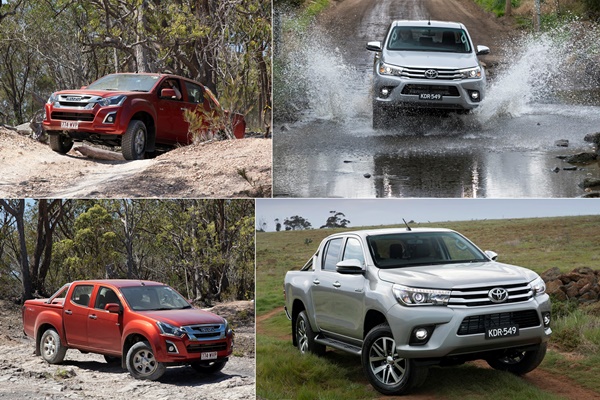 Remember if you exceed your vehicles tow ball rating or GCM then not only are you operating a potentially unsafe vehicle, exceeding what the manufacturer states is safe, but you are also voiding your warranty and insurance.

Offsetting this, the Toyota has better approach and departure angles, better wading depth by 200mm and greater ground clearance of some 40mm. These all add up to significant advantages for the Toyota.

Having said that, I have taken the Isuzu on many hairy tracks off road and never had a problem. If both vehicles are fitted with a snorkel then wading depth becomes a non-issue. 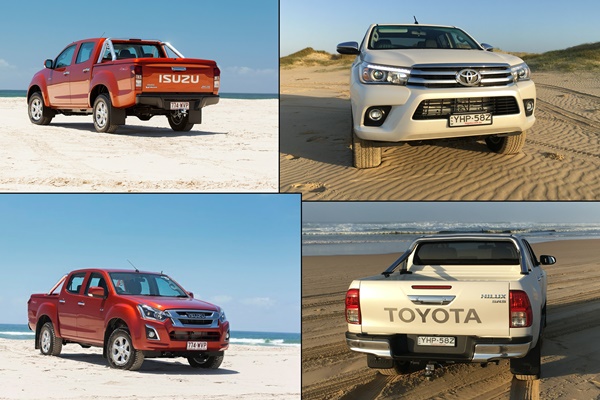 Both of these Utes have an ANCAP 5 Star safety rating. Both lag behind the Holden Colorado that takes the honours currently for Ute safety.

The Toyota has trailer sway assist, the Isuzu has blind spot indicators and Rear Park assist sensors, other than that they are identical. 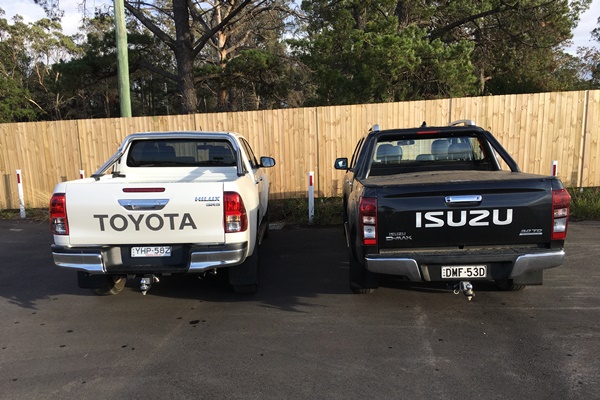 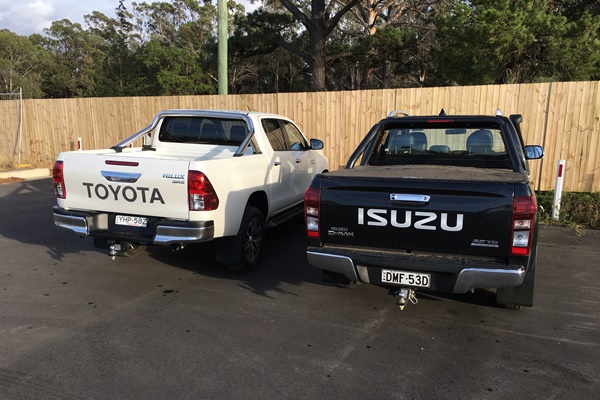 It is amazing just how close these two Utes are. Without doubt they are two of the best options for dual cab Ute buyers.

Both have a well-deserved reputation for being almost indestructible. The Isuzu engine has been proven over many years in their light truck series. It is robust, practical with some comfort features. It is Ute like.

The Toyota Hilux has proven itself over many years in the harshest and toughest conditions Australia could possibly throw at a vehicle. They lost their way for a while, but the latest 8th generation Hilux is back to their best.

About Rob Fraser 193 Articles
Rob first learned to drive on the farm in a left hand drive WW11 Jeep when he was 11, many years ago. He has maintained a strong interest in the industry ever since and was hooked on 4WDriving way back then. Often known for taking the 4WD in the driveway over the sports car, he has travelled pretty much everywhere in Australia and when he is bored goes for a drive.
Website

Toyota has added an edgy new style to the ruggedness of Australia’s best-selling four-wheel-drive with the unveiling of a special-edition model dubbed HiLux Black. […]