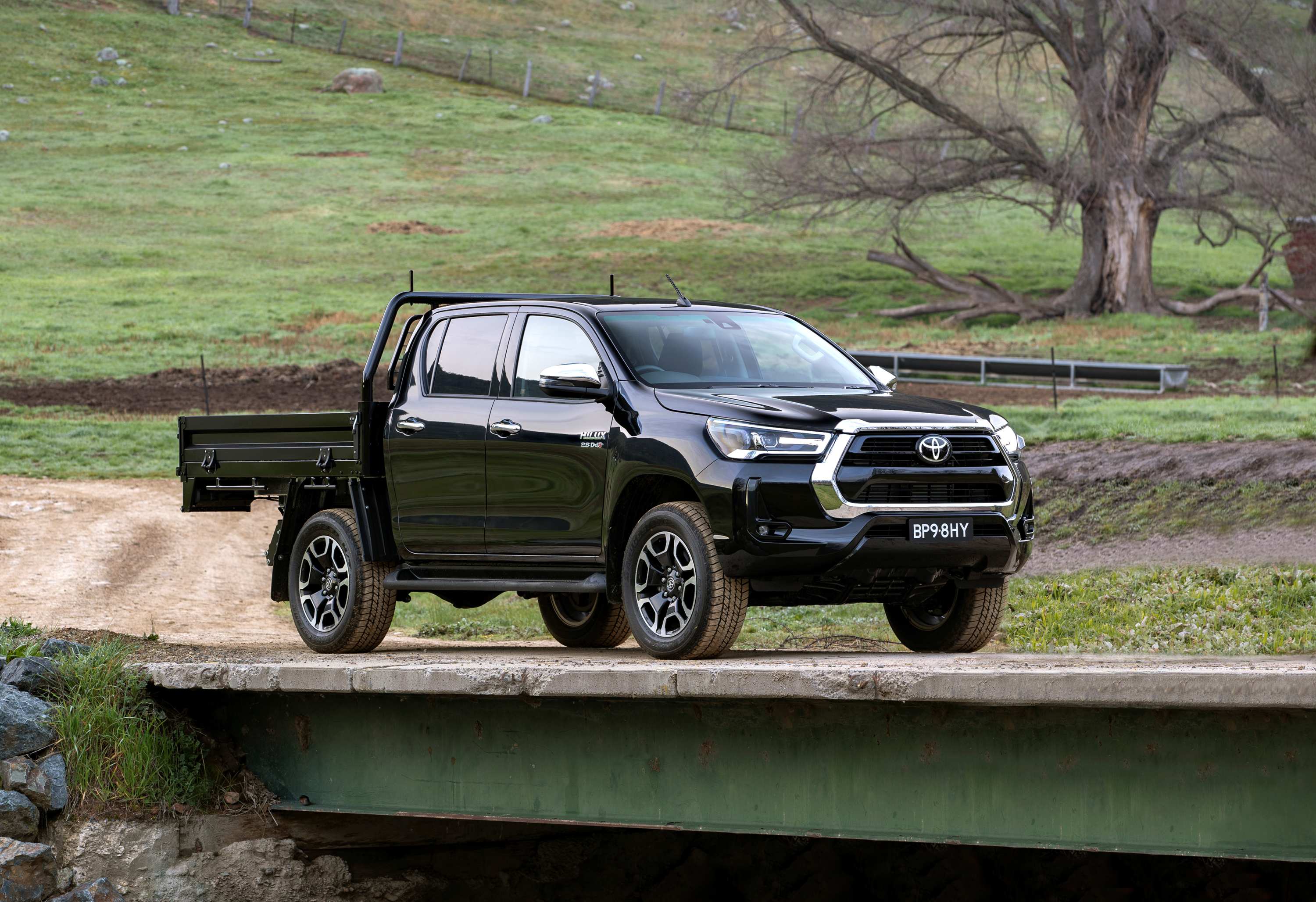 Toyota has announced changes to HiLux in performance, handling and design. All vehicles from WorkMate to SR5 grades will go on sale from 27 August.

Toyota Australia’s design studio participated in an international team to deliver a bolder, tougher look for the wide-body 4×2 Hi-Rider and 4×4 extra and double cabs.

The company’s Australian engineers were also involved in the global development of a more powerful 2.8-litre turbo-diesel engine that noticeably improves acceleration, overtaking and towing performance.

A raft of changes has been implemented to lift maximum power to 150kW and peak torque on automatic models to 500Nm while improving fuel consumption by as much as 11.1 per cent.

The local vehicle evaluation and development team assisted in re-tuning the HiLux chassis, achieving a significant improvement in ride quality when driving without a load, along with more responsive handling and even greater stability when towing.

The steering has been revised for turbo-diesel variants to make parking easier and to produce a more connected and confident feel at any speed.

As a result of the technical changes, braked towing capacity is now 3500kg for all 4×4 variants while 4×2 diesel variants are rated at 2800kg, an increase of up to 300kg. There are 27 HiLux variants with a payload of at least one tonne 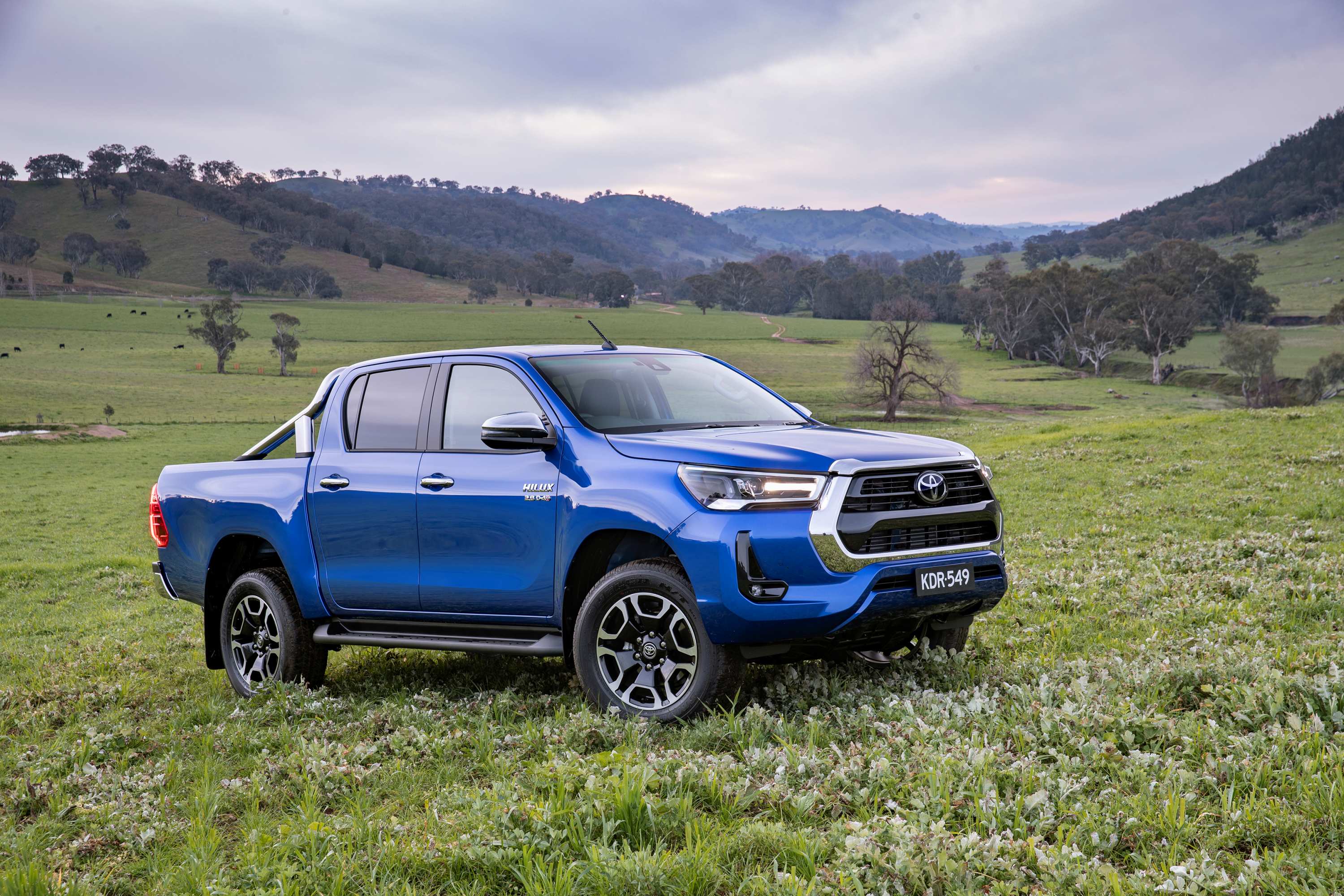 Equipment levels have also been expanded, including an 8-inch display with control knobs rather than touch-screen operation for easier use. The multimedia system has enhanced voice recognition and adopts Apple CarPlay®4 and Android Auto™5.

New-look instrument dials sit either side of the 4.2-inch multi-information display, which incorporates a digital speed readout, among other new functions.

“HiLux fans will appreciate the bold new look as well as the performance boost from our biggest-selling engine that makes towing and overtaking even easier in all conditions, including heading up a hill on a 40-degree summer’s day,”

“They will also find HiLux more fun to drive with sharper handling and an unladen ride quality that is now vastly improved, without compromising its body control when carrying a load over undulating roads,” he said.

“Such significant improvements to Australia’s favourite ute will inspire even greater go-anywhere confidence in HiLux’s dual role as a rugged workhorse and a family vehicle with the comfort and convenience of an SUV.”

HiLux 4×4 SR double-cab pick-ups can be specified with a $2,000* option pack that includes 17-inch alloy wheels, satellite navigation and digital (DAB) radio. A $2,500* option for 4×4 SR5 double cabs adds leather-accented seats and door trim, and heated front seats with 8-way power adjustment for the driver and 4-way manual adjustment for the passenger. These two options extend the core HiLux range to 33 variants.

Design features, technical details and pricing for the HiLux Rogue and HiLux Rugged X will be announced later. 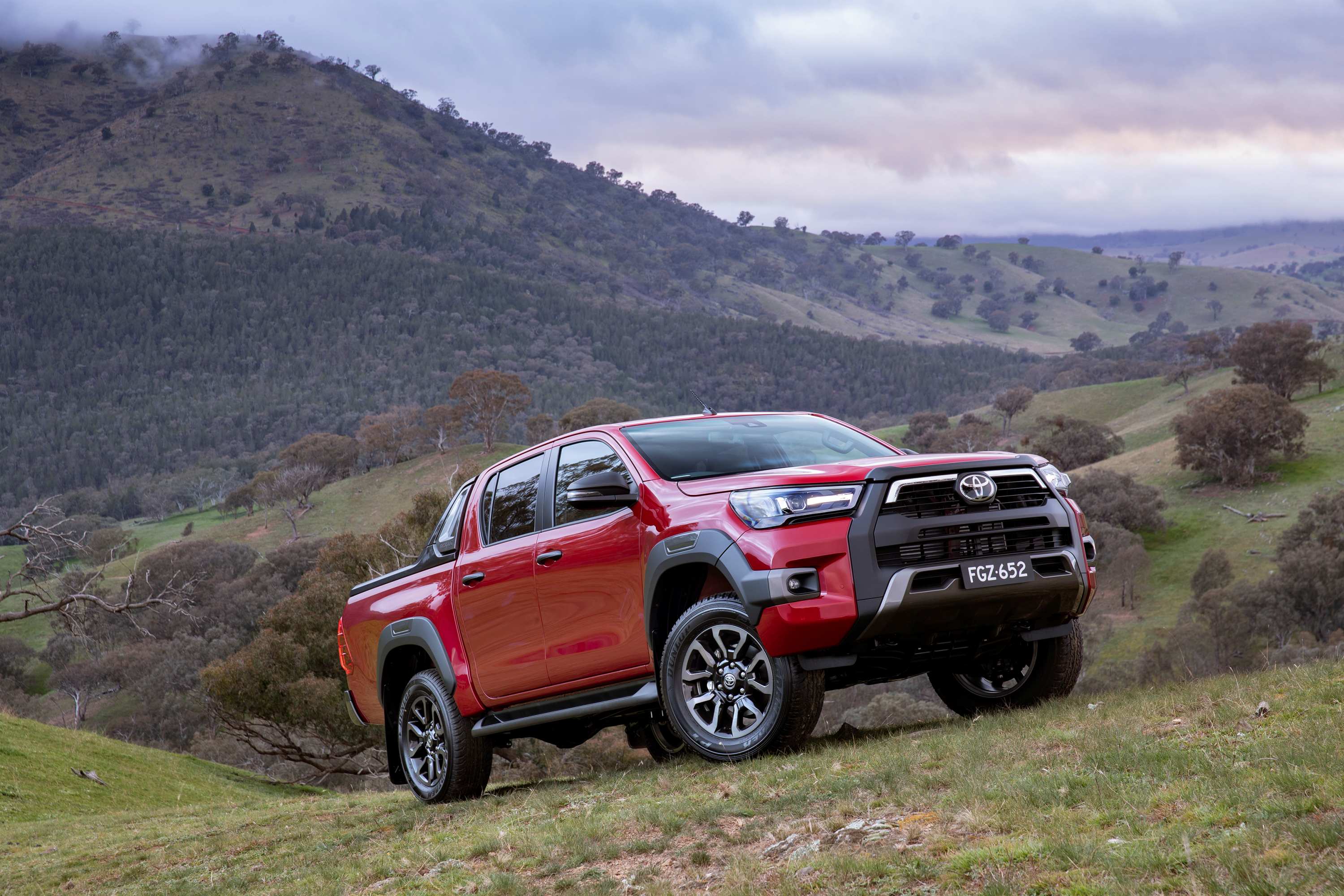 Revised exterior styling for wide-body HiLux models introduces a look that is more consistent with the global Toyota ute/truck family and reinforces the rugged credentials of Australia’s best-selling vehicle.

A stronger, more powerful on-road presence is achieved by a large trapezoidal grille that dominates the front design and incorporates more pronounced horizontal elements to deliver a wider, more planted look. Grille surrounds are black for Workmate, grey for SR and chrome for SR5.

At the side, a more muscular impression is created by integrated wheel-arch flares and a dynamic feature line running from front to rear. The cabin silhouette flows to an angled C-pillar, complemented on SR5 pick-ups by a sports bar. Side steps are standard on SR and SR5.

Workmate 4×2 variants retain 16-inch steel wheels with a revised tread compound and grooves for the 215/65R16C tyres. Hi-Rider and 4×4 single-cab Workmate and SR have 17″ silver steel wheels with all-terrain 225/70R17C tyres while 4×4 extra and double cab Workmate & SR are fitted with 17″ black steel wheels and all-terrain 265/65R17 tyres. The 17″ alloy wheel available with the SR option pack has changed to a dark-grey finish while retaining the 265/65R17 all-terrain tyres. The 18″ SR5 wheel, shod with 265/60R18 rubber, changes to a two-tone machine finish.

At the rear, the HiLux design is cleaner and more powerful with strong fender shoulders that extend rearwards, a unified line that connects the cabin and deck, and steel bumpers – dark silver/black on Workmate and SR, chrome on SR5. Pick-ups incorporate a rear step. Distinctive new taillights for SR5 pick-ups enhance night-time visibility and reduce power consumption. 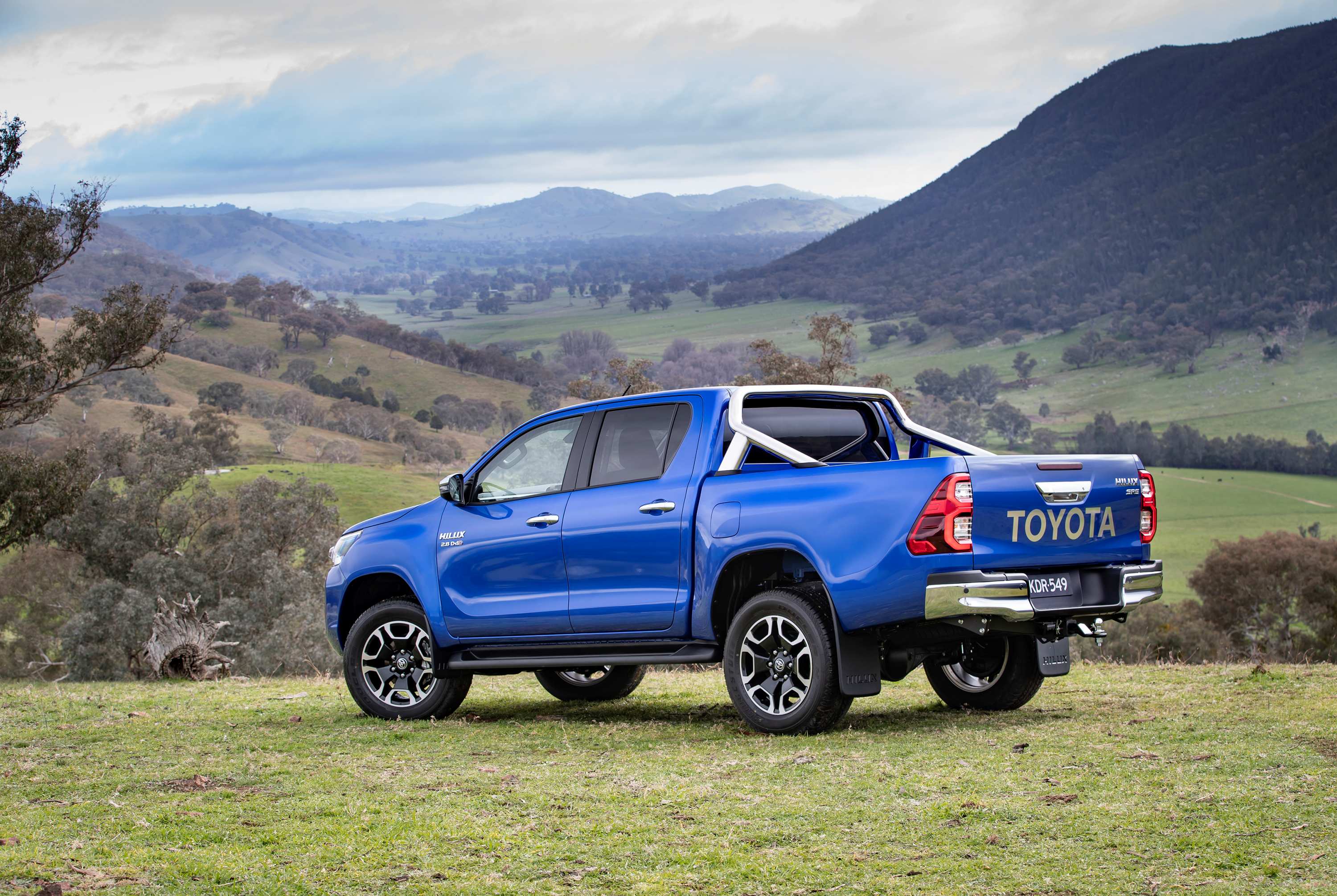 The interior design theme for facelifted HiLux amplifies the balance between the durability and functionality required for work use and the refinement of an SUV.

An improved multimedia system is centred on an 8-inch display screen (previously 6 or 7-inch) with knobs replacing the capacitive-touch interface to make operation easier, such as when wearing heavy gloves.

New speed and rev counters have a cleaner and more premium appearance with white numbers and pointers on a grey-metallic background. The twin dials sit either side of a high-precision colour 4.2-inch multi-information display (MID) that includes a digital speed readout. In addition to conveying safety settings, odometer and trip displays and other driving support information, the MID now offers even greater driver comfort and convenience features, including the front-wheel angle.

Workmate has black fabric seat and vinyl floor coverings, providing the toughness and durability required for daily commercial use. SR and SR5 feature a high-grade, embossed black seat. SR retains its vinyl flooring while SR and SR5 double cabs have a 60/40 split base for the rear seat and a stowable armrest. In addition, SR5 is fitted with a premium shift knob and steering wheel and chrome door handles. All grades now receive all-weather floormats. 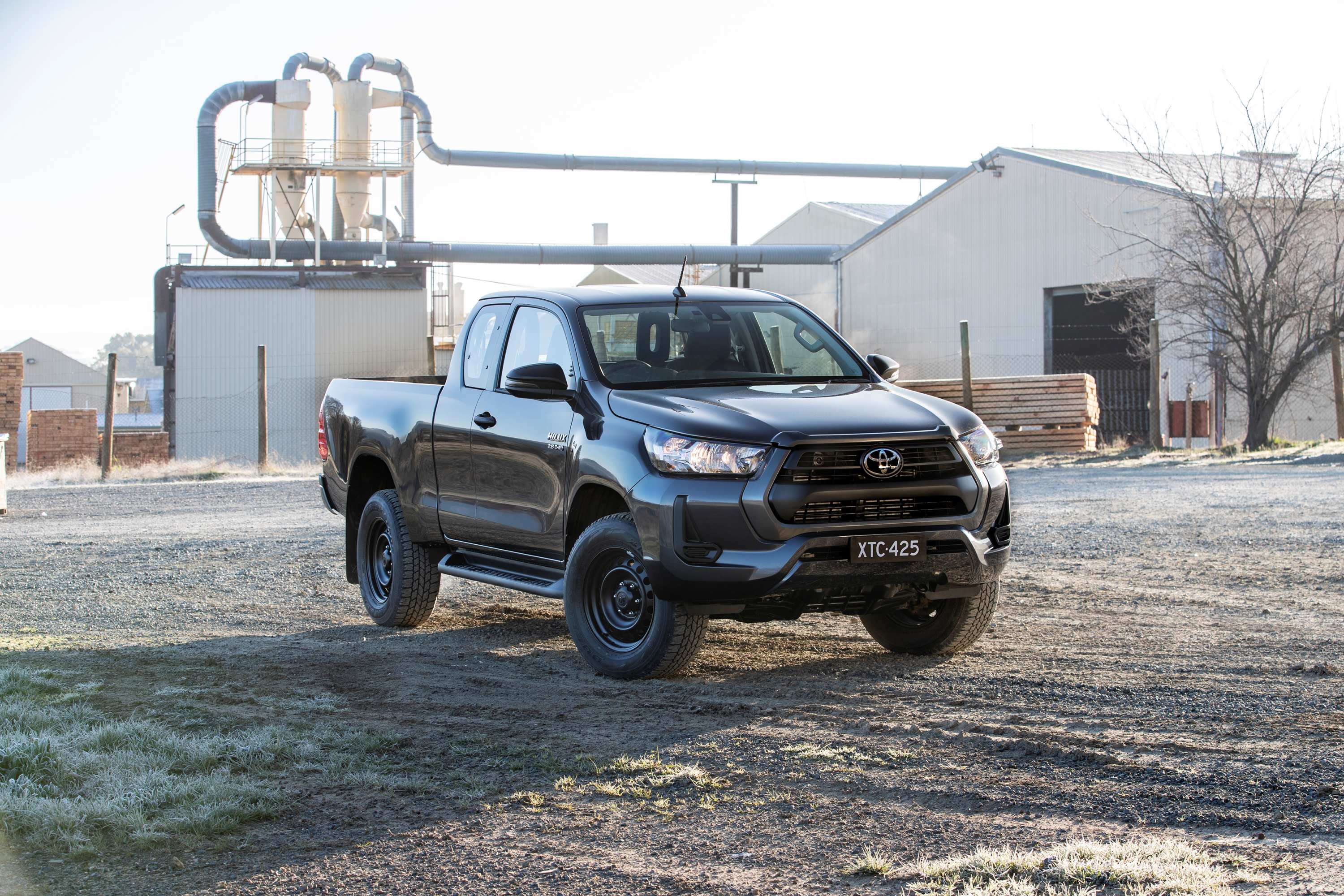 Beefier performance from the biggest-selling engine

Toyota has wrought substantial improvements from the two HiLux turbo-diesel engines with the main focus being the 2.8-litre four-cylinder 1GD, which now develops 150kW and up to 500Nm with a recalibrated six-speed electronic automatic transmission. Torque with the six-speed intelligent manual gearbox is 420Nm.

The updates result in stronger overtaking and towing on highway hills with maximum torque now available across a wider range of 1600-2800rpm (auto) and 1400-3400rpm (manual). HiLux also maintains its renowned low-rpm torque and driveability in city and off-road conditions.

Toyota engineers improved performance and fuel economy simultaneously by adopting a larger, heavy-duty turbocharger with a ball-bearing cartridge for exceptionally crisp and strong throttle response, and a new common-rail injection system with a higher maximum fuel pressure of 250 MPa.

The 1GD engine’s smaller sibling, the 110kW/400Nm 2.4-litre four-cylinder 2GD, shares in refinements that improve cooling and fuel economy, including the higher-pressure common-rail system, optimised pistons and rings, and the alternator which has been uprated from 80 to 100 Amps.

On SR and SR5, drivers can choose two modes: ECO which reduces throttle response in favour of fuel economy and reduces power consumption for heating and cooling; and POWER to provide sharper acceleration response for a more engaging drive on undulating and winding roads.

HiLux 4×2 Workmate single and double cabs are also available with the 122kW/245Nm 2.7-litre four-cylinder petrol engine matched with either a five-speed manual gearbox or a six-speed automatic.

Engineers further developed the rear suspension of the eighth-generation HiLux, which introduced longer leaf springs to suppress road vibrations, wider spacing of the springs for stability while cornering under load, and revised attachment points to promote steering stability.

The 2020 facelift has resulted in re-tuning of spring rates, shock absorbers and suspension bushes as well as revised cabin mounts. These improvements are designed to deliver a more agile handling response and improving ride comfort, particularly when unladen on country roads and over speed humps.

At the same time, HiLux maintains its renowned off-road performance, load-carrying capability, stability and body control – including on corrugated dirt roads and when fitted with a bull bar and towing a trailer.

Shock-absorber damping force on 4×4 and 4×2 Hi-Rider HiLux has been revised for improved ride comfort and less vibration, particularly with low loads.

Revised cabin mounts reduce the transmission of vibrations from the road to the occupants.

All diesel variants benefits from a new variable-flow control power-steering pump that improves fuel economy while delivering a more natural driving feel that varies depending on the driving conditions.

The aim was to offer high assistance to support low-speed manoeuvres such as parking while maintaining better feel with less assistance at highway speeds and on country roads. There is also a specific mode for off-road driving in low range.

Downhill Assist Control is standard on all 4×4 SR5 variants and 4×4 automatic SR double cabs (including cab-chassis).

New for SR5 double and extra-cab pick-ups are two front and four rear sonars7 to support parking. When the system detects objects, it alerts the driver with a buzzer and a message in the multi information display.

HiLux 4×2 Hi-Rider and 4×4 have 319mm ventilated front discs with opposed-piston callipers at the front and 295mm self-adjusting rear drums with leading and trailing shoes. 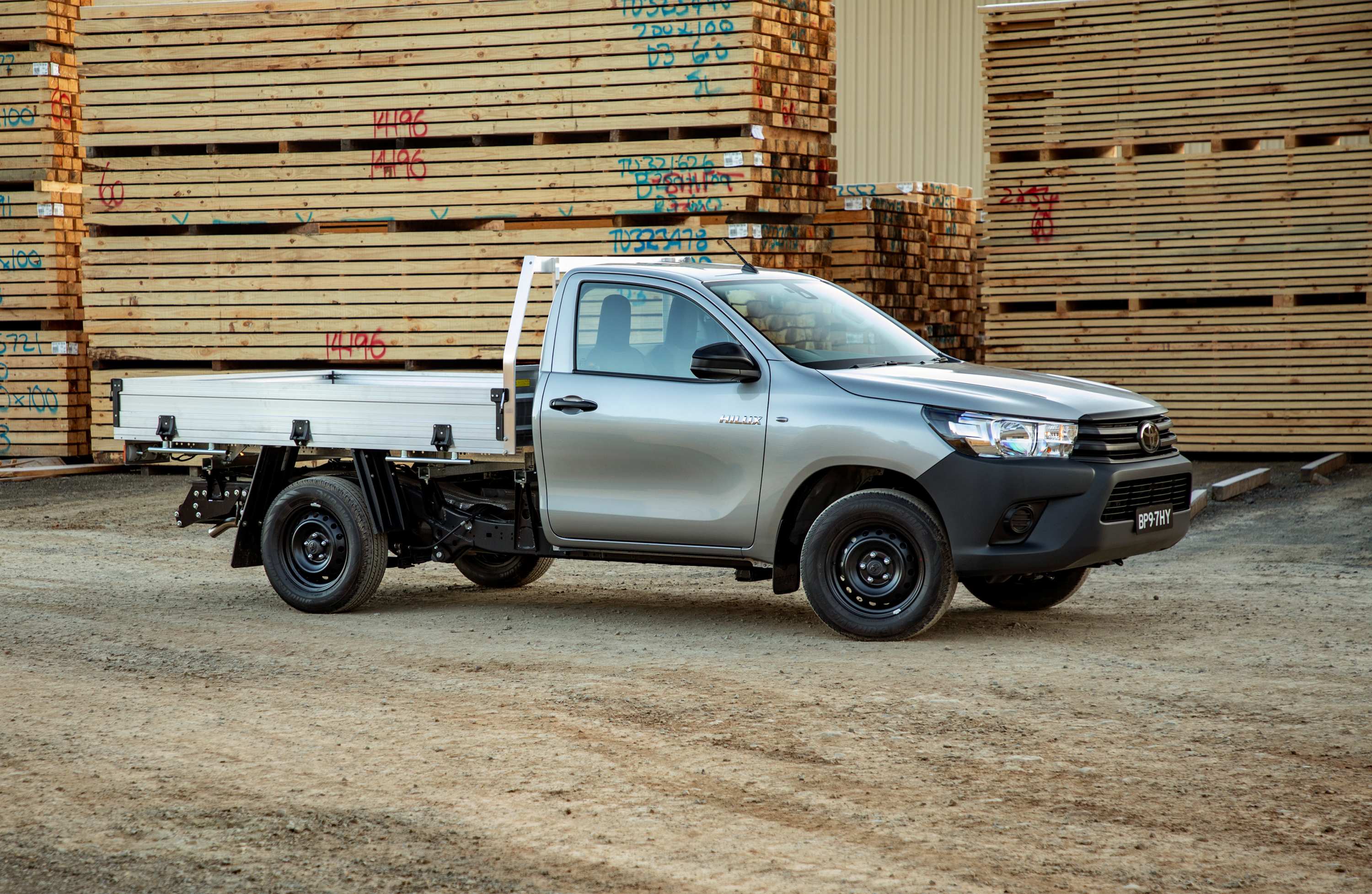 *Towing capacity is subject to regulatory requirements, towbar and vehicle design and towing equipment limitations. Ask your dealer for Toyota Genuine towbar capacity and availability details.
^Payload weights are nominal and vary depending on options and accessories and tray/body type.
#Manufacturer’s list prices are provided for media purposes only. Statutory charges or other on-road costs are not included.

Rugged X – Toyota Hilux is the number one selling motor vehicle in Australia and recent upgrades will push it onto even more driveways. […]

HiLux Rogue provided a very comfortable driving experience overall. I enjoyed the balance between the off road features and more sophisticated interior features this model showcased. […]

2018 Toyota Hilux Rogue, Rugged and Rugged X 4×4 dual cab utility. The new Hilux variants offer almost unrivalled practicality on and off road. That’s one of the reasons why Hilux is the bestselling vehicle in Australia. […]