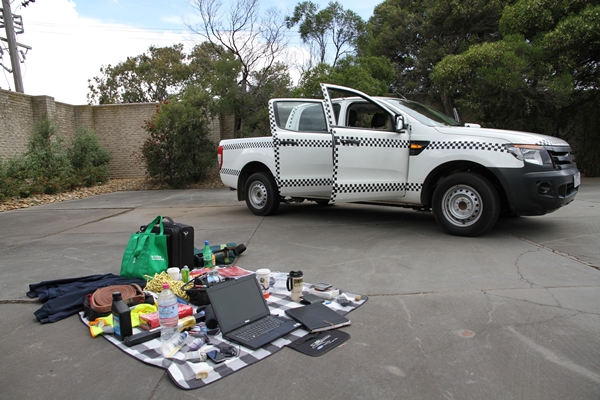 The all new 2011 Ford Ranger has a multitude of storage spaces as the engineers behind the all-new Ford Ranger have been thinking out of the box.

Not only can the Ranger swallow any number of things in its cargo box, the Double Cab model has 23 stowage spaces in its cabin – more than many rivals – which can store a wide number and variety of objects.

“We are very passionate over every millimetre,” according to the package supervisor, Product Development, Ford Australia, David Stanley. “That’s the difference between a good car and a great car – lots of attention to every last millimetre.”

Door pockets can easily fit 1.5-litre bottles while the glove box is big enough for a 16-inch laptop computer. A separate driver’s glove box provides greater accessibility to items such as a can of soft drink, sunglasses, a wallet or keys.

The 8.5-litre centre console bin – also the largest in the segment – helps keep up to six beverage cans cool with a duct blowing cold air from the air-conditioner. It is big enough to hold CDs, 600-millilitre bottles and takeaway food containers. The console bin also has an upper tray to store a mobile phone, wallet and coins.

At the back, the rear seats fold up to reveal storage bins for items such as tools, rope, 4×4 recovery straps.

The seats also fold down to store items such as a jack, a tyre inflator, a one-litre oil bottle and a first aid kit. On selected models, the centre armrest in the rear seatback folds down and includes two cupholders.

Engineers have chased down every spare millimetre in the cabin to deliver a truck that is not only one of the most spacious in its class but also has the most amount of practical stowage space.

Instead of succumbing to the easy solution of making something bigger whenever an engineering problem cropped up, they relentlessly squeezed out every millimetre to reduce wasted space.

The Ranger made its successful world premiere in Sydney last September ahead of its Q3 release this year.

Search for space
With cupholders and seatback pockets that hold bulky street directories becoming run of the mill, Ford engineers constantly look out for “dead spaces” that can be converted into useable storage areas.

The rear of the centre console bin had quite a lot of space free under the double opening console bin lid and tray hinge. The engineers had not originally planned to put a storage area there but the space was for the taking. So they put in a pocket that could fit a wallet, a mobile phone or an MP3 player.

In other instances, a clever bit of innovative thinking actually converted a design feature into a viable storage space. A slight recess has been put into the top of the instrument panel as a design feature. But by putting in two small ribs across the recess, it became an area which could hold an office pass or other small items.

One of the biggest challenges in designing a truck that will be sold in 180 countries across five continents was having to satisfy the legal requirements in each country. Finding a place to store the fire extinguisher – a safety requirement in many countries – was a prime example. Each country had specific stipulations on the size and location of the fire extinguisher, resulting in numerous different, and sometimes contradictory, requirements.

The engineers looked at storing it along the tunnel but it took up too much legroom.
They thought of putting it inside the glove box but that would not leave much room for anything else.

In the end, they tucked it underneath the glove box. Ergonomic research showed that it did not affect people getting in and out of the car and the position was also accessible enough for smaller-built drivers to reach over and release the fire extinguisher in an emergency.

“The number of storage spaces is becoming a key why-buy with more customers using their truck for both work and family,” Stanley said. “We intentionally went for the biggest spaces wherever we could. Where the competitors could fit only smaller bottles, we could fit larger ones.

“We went all out to make sure the all-new Ford Ranger is class-leading in stowage. And we did it.”