Rugged X – Toyota Hilux is the number one selling motor vehicle in Australia and recent upgrades will push it onto even more driveways. 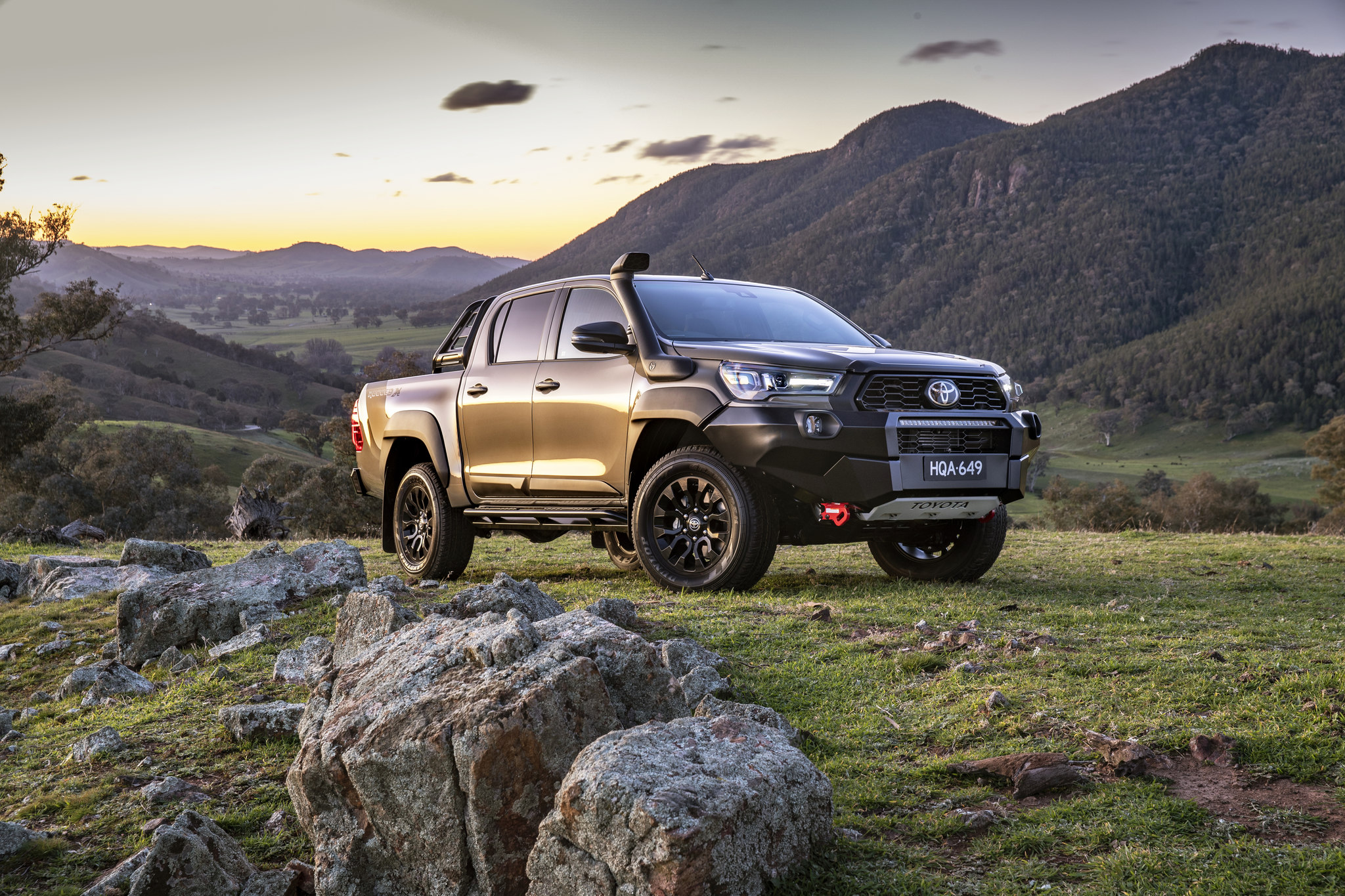 The current shape came out a few years ago but some criticism was levelled at power and torque outputs from Hilux’s 2.8-litre turbo diesel four cylinder.

At 130kW and 450Nm it was a touch shy of the competition from Ranger, V6 Amarok and back then, Holden Colorado.

Toyota has had a few years to plan this upgrade and along with the powertrain upgrade, Hilux got a new, better looking look front end and revised suspension bushes, steering, revised 6-speed auto and engine mounts.

It makes a hell of a difference to what was already a pretty good thing.

About the only issue I can find is the drum rear brakes but they have strengths in areas some owners would prefer.

All these changes have upped the price with the Rugged X tested (the one to get) going for a sizeable $69,990.

But as soon as you hook up a 2.0-tonne trailer rig you’ll appreciate the new model. It goes like a train and is virtually unstoppable off road except for the road oriented tyres. Comfy around town too….good work Toyota. 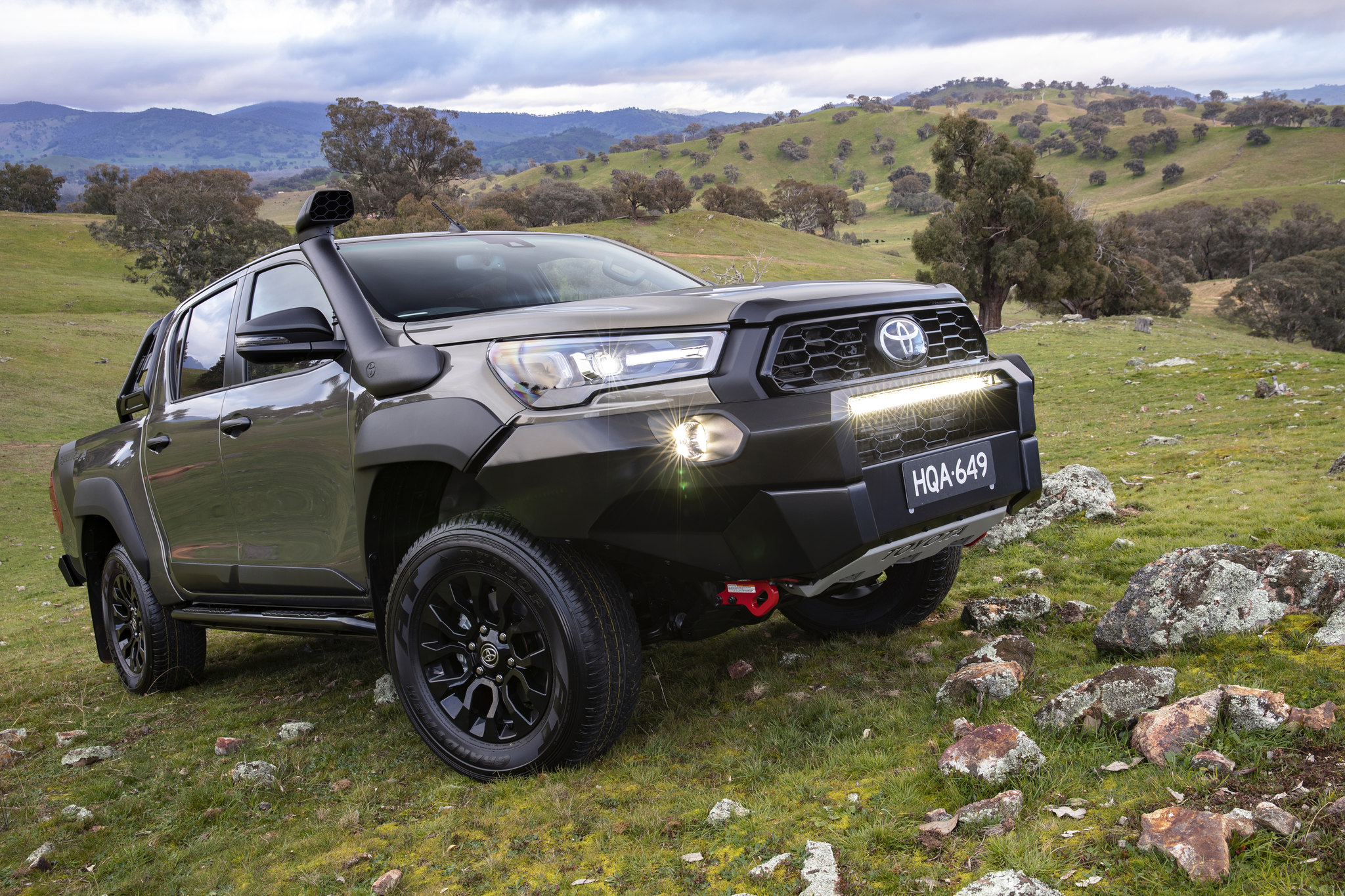 There’s no ignoring the Ford Ranger influence to the face of Hilux these days particularly the pronounced trapezoid shape grille. Looks like a scaled down Ranger grille but other details are more in line with Toyota’s global light commercial vehicle styling. It’s a tough looking beast from every angle though still a generic one tonne ute shape with a decent size load tray and high ride height.

The Rugged X gets proper steel bumpers/bull bar along with other metal bar work under the side sills and in the load tray. There are various metal protection plates under the front and chunky wheel arch flares to cover Rugged X’s big wheels/tyres.

Love the integrated front light bar above Hilux’s number plate and the real metal grille mesh to keep crap away from the radiator and other critical mechanical components.

A large snorkel runs up the driver’s side A pillar and red tow hooks are mounted at each corner. The large blacked out decals set Rugged X apart from other models imparting an even tougher look to this good looking one tonner.

Inside is standard Hilux/Toyota with grey fascia, passenger car style dash and easy to use controls. Personally I prefer rubber floor mats and cloth upholstery but the Rugged X gets carpet and leather. There’s a shroud over the instrument pod and numerous controls on the chunky steering wheel.

A large centre mounter touchscreen contains all infotainment systems as well as vehicle set-up.  The dash material is mostly hard touch but some soft touch panels are dotted about the cabin along with plenty of cup holders.

It’s a grey/black interior with metal look fascia to impart more of a passenger car appearance inside. Most of the switches/controls and interior fittings can be seen on other Toyotas but that’s a good thing.

The leather upholstery is fairly firm but the seats are a good shape and there’s plenty of room inside in both rows.

Access to the rear three seats is aided by decent size rear doors and headroom isn’t an issue.

The Rugged X scores plenty of luxury kit and can be used for long distance touring with confidence. 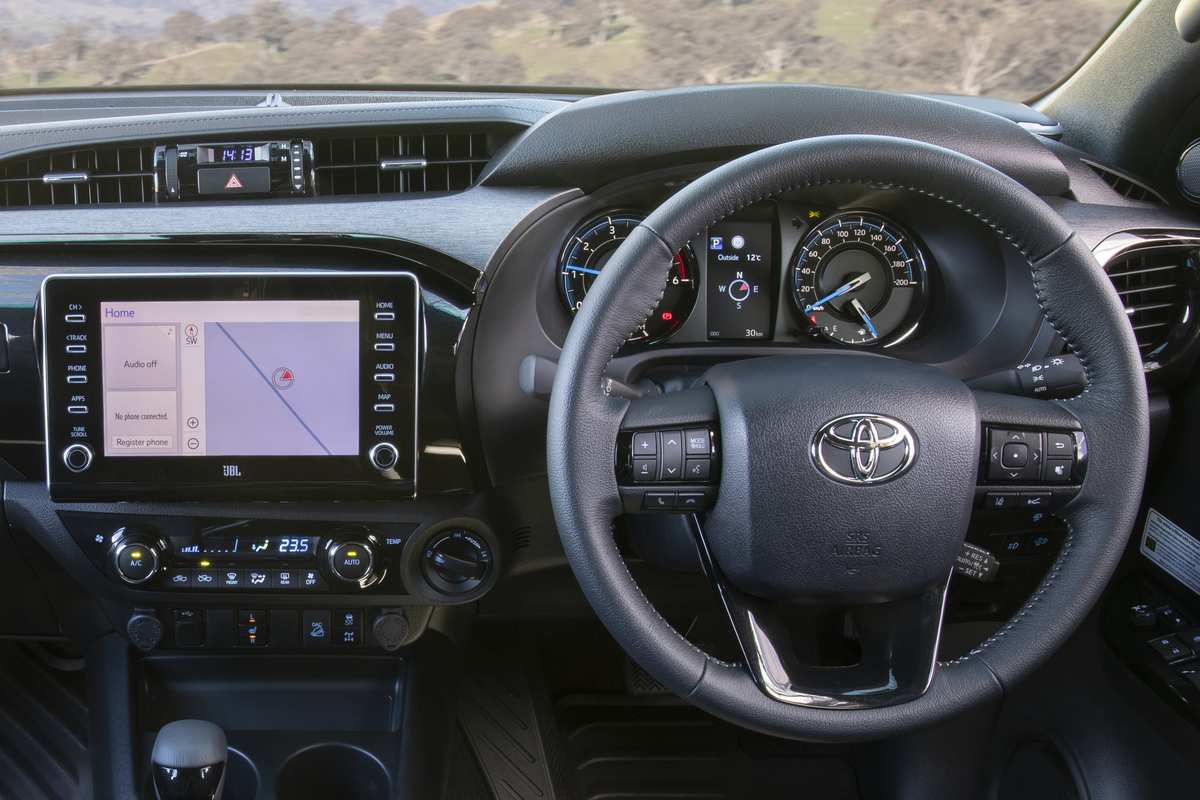 As the top of the range Hilux, Rugged X doesn’t miss out on much with goodies included like; 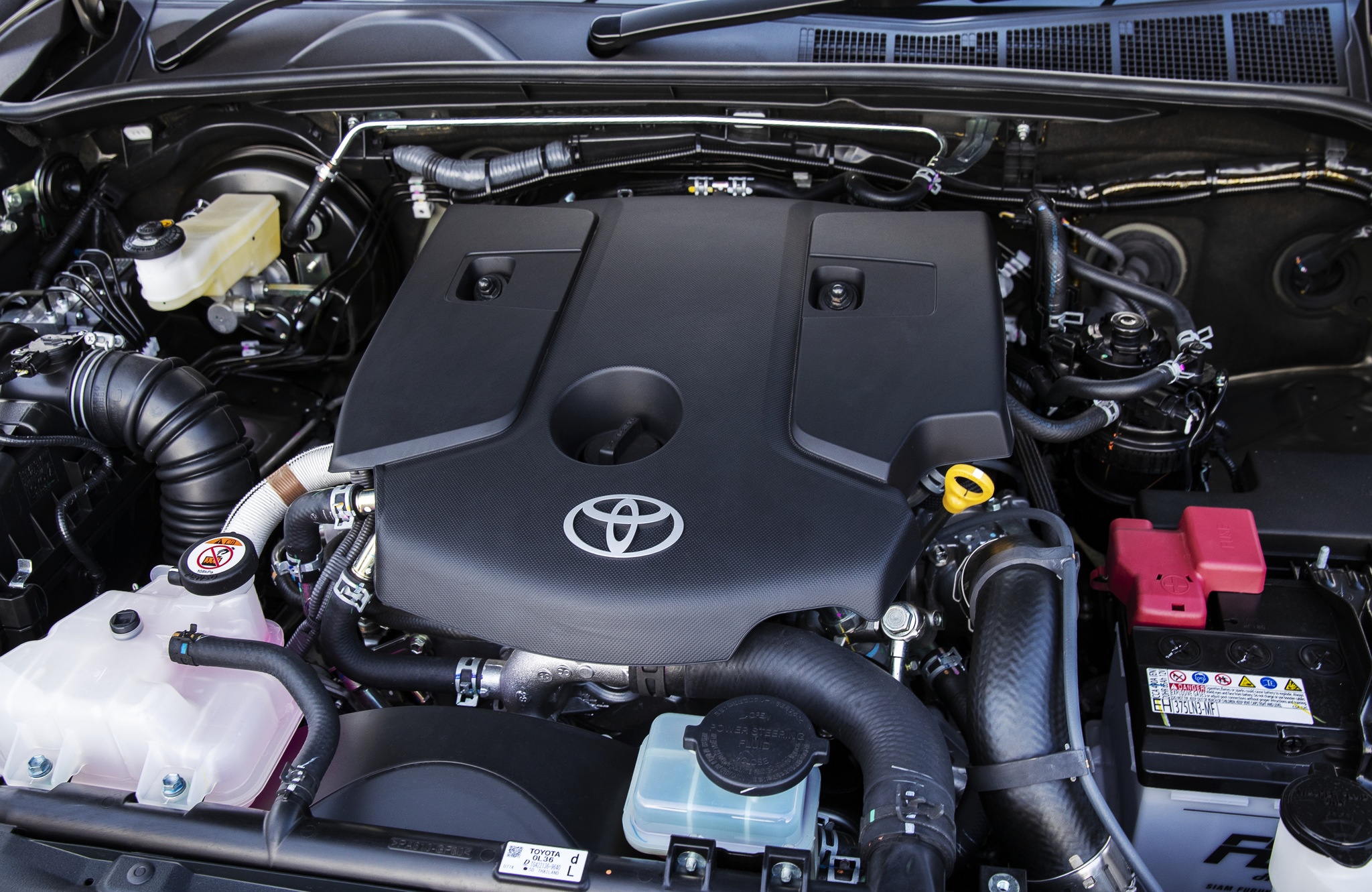 Revised Hilux is a big improvement on its predecessor in many ways not the least in engine performance and funny enough, fuel economy. Power and torque are significantly up on the earlier model while fuel economy is significantly better. I saw mid 8.0L/100km without really trying and it’s capable of towing 2.0-tonnes at around 11.0 L/100km, perhaps a touch more.

Toyota engineers must have put in plenty of R and D time on Hilux’s turbo and fuel system to achieve gains at all levels.

And yes, it has a bigger turbo and larger capacity cooling system along with revised engine mounts, steering and a recalibrated 6-speed auto to capitalise on all upgrades.

While not a sporty vehicle, Hilux is tidy enough around corners and has strong brakes with relatively responsive steering  while ride quality is impressive and certainly a lot more comfortable and controlled than some of the over sprung, jiggly competitors.

You can hear the engine at some speeds but noise dies down to a minimum once cruise is achieved.

It’s easy to drive with all controls easy to find and use including the proper 4WD system that can be selected on the move. 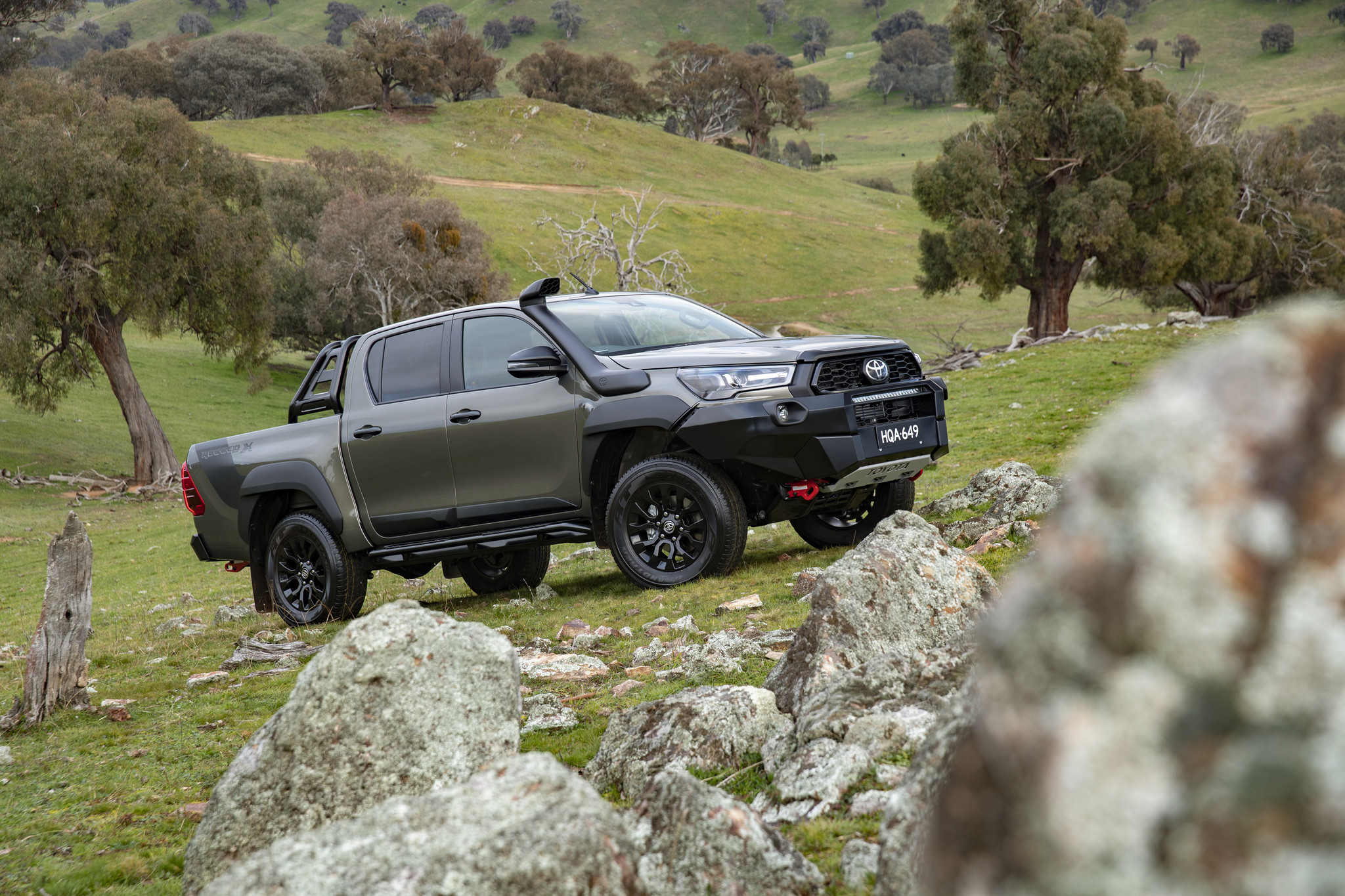 Hilux scores a 5-star ANCAPO crash rating thanks to its comprehensive array of driver safety equipment and how it’s built.

There’s a pre-collision preparation system, autonomous emergency braking with pedestrian and cyclist recognition, adaptive cruise control and that annoying lane departure warning with steering assist that I always switch off preferring to be in full control of the vehicle myself. LED headlights cast a bright, white beam. I particularly like the protection package that includes steel bumpers and under engine protection plates, rock rails along the sides and generous guard flares to stop mud and rocks from spraying up.

Not So Good Bits 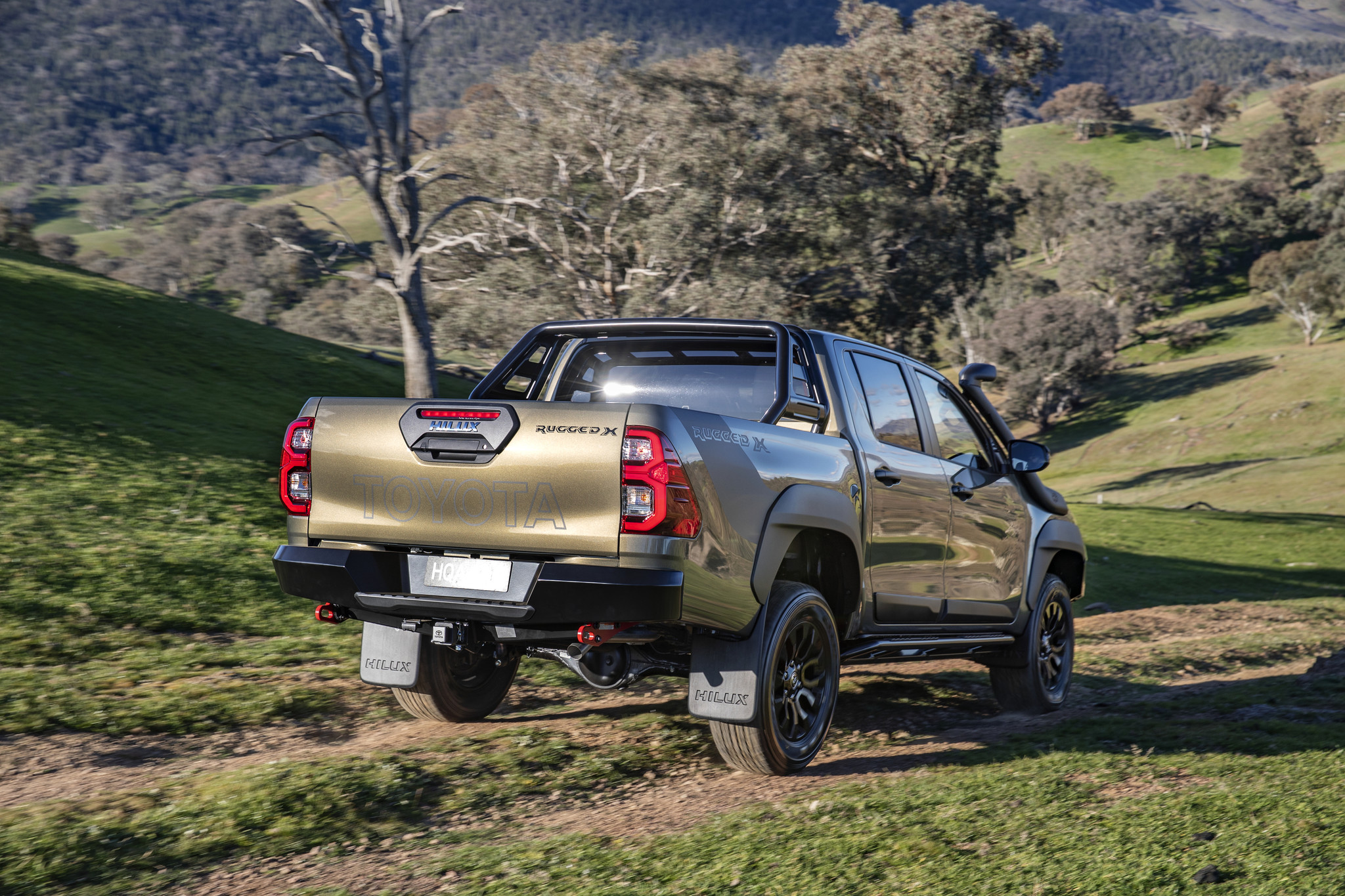 Yep. Would have a new Hilux in a blink. It goes better, looks better and uses less fuel than before, is incredibly practical and comfortable over a long run. Pay the money and keep on smiling.

*MLP – Manufacturers List Price includes GST and LCT but excluding statutory charges, dealer costs and dealer delivery. See your dealer for RDAP. Does not include price of any options.

Yep. Would have a new Hilux in a blink. It goes better, looks better and uses less fuel than before, is incredibly practical and comfortable over a long run. Pay the money and keep on smiling.

In today’s market there really isn’t a direct competitor for the single cab Toyota LC 70 Dual Cab Ute. The LC 70 is extremely popular with buyers that value the almost indestructible nature of the ubiquitous LC 70. […]