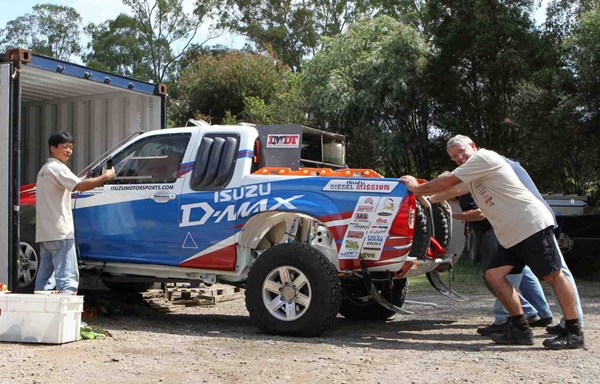 With the Isuzu MotorSports D-MAX ute on its way to Argentina for the start of the 2011 Dakar Rally, driver Bruce Garland is now in final preparation mode.

The racing ute, a service vehicle and 30 boxes of parts and tools were packed into a shipping container at Garland’s outer Sydney base last week, for the long sea journey to Buenos Aires.

Garland, navigator Harry Suzuki and four Isuzu Motorsports crewmembers fly out on December 22 for a week of testing and acclimatising in the mountains, before the marathon event gets underway on January 1.

“We’ve got a new engine coming from Isuzu, so we’ll drop that in the car and go into the Andes to test it,” says Garland.

“One of the Isuzu engineers will come with us, because the new engine will need to be re-tuned to work more efficiently at high altitudes.

“We need to be re-tuned too! Working up to 4000m above sea level is really hard – you feel the pressure building up in your head and you lose concentration and focus.

“If you try to do something too quickly, it’s very hard to breathe, so it’s really difficult if you get bogged and need to dig the car out. You can get quite sick if you’re not careful, but obviously we know more now about what to do and how to do it, having been there before.”

But before they even get to Argentina, there is some important pre-event training happening, with less beer and more bike riding.

“It’s so hard walking in the dunes and especially digging in them, so Harry and I need to be as fit as we can be so we can do it as efficiently as possible.

“It’s mid-summer over there too, and we’ll be in desert conditions most of the time, wearing three-layer race suits and fireproof underwear. That’s a big enough handicap before you even get out of the car, so the fitter you are, the better you cope with the conditions.”

Aside from fitness training, the team will do some tyre testing with their 2010 Dakar car, and some sand dune testing on Stockton Beach, near Newcastle – not just for confirming car set-up and tyre adjustments, but to practise their sand recovery skills too. They’ll also be doing some last-minute shopping.

“There are some parts we couldn’t get in time to put in the container, that we will have to take as excess baggage, and a few other bits and pieces.

“Because we’re on the road for two weeks during the event, and usually only go close to small villages, there’s a heap of stuff we need to take that we can’t buy as we go. So we have a list but we’re trying to keep it short – we took 300kg of excess baggage last December and that gets pretty pricey!”

The D-MAX ute that is now on its way to Argentina is lighter, faster and better handling than its predecessor but still based around the Isuzu’s production steel cab and chassis frame.

Under the bonnet, the D-MAX’s 3.0-litre turbo diesel engine has been tweaked to suit the purpose ahead. It produces approximately 630Nm of maximum torque and around 192kW of peak power, or an increase of 75 and 60 per cent, respectively, on the standard D-MAX engine.

Garland has described the difference between his previous utes and this new D-MAX as that between prop and jet-powered planes.

The third South American-based Dakar Rally runs from next January 1-16, with the start and finish in Buenos Aires. Competitors will travel around 9000km from coast to coast (Argentina-Chile), crossing the Andes Mountains and the Atacama desert.