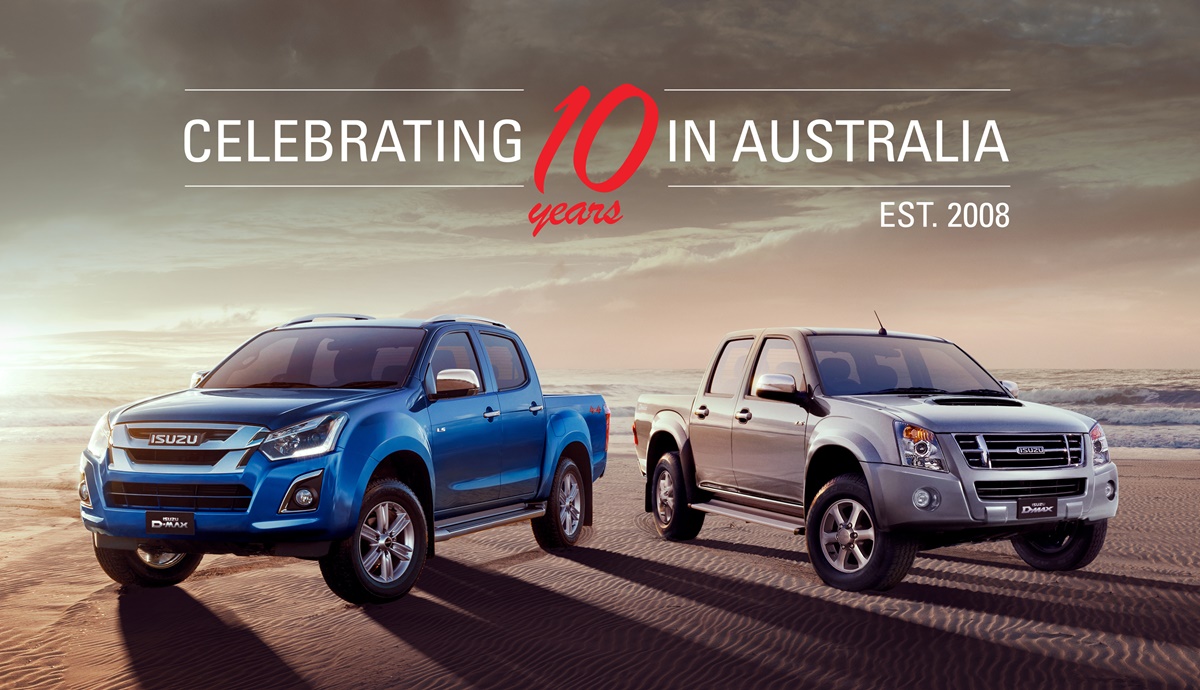 October 2018 marks a major milestone for Isuzu UTE Australia (IUA), celebrating 10 years since inception in October 2008. Launching locally with the internationally branded D-MAX, IUA took on the ultra-competitive 1-tonne Ute market with its powerful and efficient 3.0L common-rail turbo diesel engine and in doing so not only cemented its position locally, but is also the biggest export market outside of Thailand.

The growth of IUA over 10 short years has been nothing short of remarkable, achieving a humble 273 sales in 2008 (October – December), with sales totalling 10,209 just five years later in 2013, illustrating just how rapidly the brand was able to grow in such a competitive segment. In April 2017 IUA posted 100,000 cumulative unit sales of its 1-tonne D-MAX Ute and 7-seat MU-X SUV since inception, and sales have not slowed since then, posting nine consecutive years of double-digit growth at the end of 2017.

Over 100 years of Isuzu product development and reliability have underpinned IUA’s decade of success, meaning that Aussie drivers have been able to count on Isuzu UTE vehicles to get them wherever they want to go for over 10 years. Since launch, Isuzu products have continuously evolved on the back of customer feedback, resulting in vehicles which are specifically designed for the tough Australian environment. Our ability to deliver honest, reliable products that are not only fit for purpose, but exceed our customers’ expectations, has resulted in more Aussies than ever preparing to go their own way.

“There are too many significant achievements to mention” stated IUA Managing Director, Mr. Hiro Kuramoto. “The highlights have been many, and we continue to be humbled by the Australian response to our products. Since launch, our products have been endorsed with a number of awards, and the positive feedback from customers continues to confirm that we deliver honest, reliable products.”

The 10 years in Australia have been punctuated by a plethora of accomplishments with 2012 marking the dawn of a new era for the Isuzu D-MAX, with the launch of the new generation model. Retaining an exclusive 3.0L engine, the totally new D-MAX landed in Australia and brought with it new levels of power, comfort and safety.

2013 saw the arrival of the Isuzu MU-X, a stylish 7-seat SUV that offers a combination of performance, comfort and serious off-road ability. It now leads the way as the number 1 Ute-based SUV in Australia, ahead of major long-term players as well as currently placing 4th in the SUV-Large segment.
2015 saw the launch of of IUA’s new GO YOUR OWN WAY marketing platform, which was developed to reflect the spirit of the brand, its dealer network, its staff and its customers. The GO YOUR OWN WAY brand tagline, featuring the iconic song GO YOUR OWN WAY, covered by the Australian rock band Kingswood, was an important message in the direction of the brand.

The true epitome of the GO YOUR OWN WAY message was the creation of the I-Venture Club also in 2015, where an IUA-led training program was developed to show customers how to truly ‘go their own way’ in their D-MAX or MU-X. The only manufacturer-based training program in Australia, the I-Venture Club helps their owners get the most out of their Isuzu vehicle in a safe and structured environment under expert tutelage by offering them the opportunity to join excursions to some of Australia’s most breathtaking and challenging off-road destinations. Three years on, and the I-Venture Club continues to go from strength to strength, building customer confidence and showcasing the inherent capability of the vehicles.

“Customer satisfaction is a defining factor in our ongoing success,” confirmed Mr Kuramoto, “which combined with the quality of our product and our after-sales care package defines the positive customer experience that people expect when purchasing a vehicle.”
“I believe that if we can continue to respond to customer feedback and deliver on our promises, our brand will continue to grow from strength to strength.” Mr. Kuramoto confirmed.

It is true to say that the Brisbane-based distributor has experienced phenomenal growth in its short tenure, and is currently looking to achieve double digit growth for each of its 10 years in Australia. With a goal of 30,000 annual sales by 2020, the focus is firmly on further growth of the brand. As we celebrate our 10th birthday in Australia, IUA is justifiably proud of its achievements since inception.

With over 140 authorized IUA outlets across Australia, and a reputation for delivering real reliability, the Isuzu machine shows no sign of waning – and with a growing customer base of fans, the only way is up.

Five of the Best Super Utes Available or Concept

Super Utes – We all lust after the hyped up Ute. That’s why the aftermarket accessory shops are so popular. The bigger tyres, the super lift, the absolute go anywhere ability. These are the things that excite true 4WD Ute enthusiasts. […]

Finally Isuzu has launched its all new D Max. The 2012 Isuzu DMax is available from the 2nd July in in five specification levels and three body configurations along with one engine and two transmission choices. The all new 2012 Isuzu DMax continues the Isuzu history of robust competent and practical utes. […]